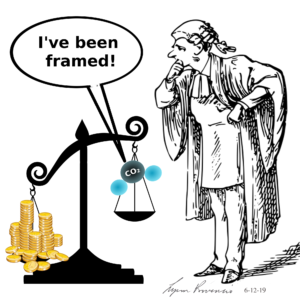 America is under attack.  Our freedom and liberty is at risk.   The goal is to displace capitalism with socialism.  The mechanism is a very elaborate, ongoing, and evil plot to vastly restrict our energy supplies. In so doing America’s political will be destroyed and our beloved country will find itself joining with the European’s and other countries in pursuit of a single worldwide government under UN control with a vastly reduced world population; a population no greater than a tenth of today’s.

The scheme to accomplish this is based on the very simple harmless, odorless, chemical called carbon dioxide (CO2).  Yes carbon dioxide.  The very chemical all animals exhale with each breath. The basis of all life forms on Earth.

The greatest deception ever created by mankind is the notion of Anthropogenic Global Warming now simply called climate change.  Without any empirical, demonstrable evidence whatsoever, the media has all but convinced our citizens, along with a significant portion of our politicians, that climate change is real, and is an existential threat to our continued life on Earth.  The proposed cure for this nonexistent “crisis” is the vast reduction of the use of fossil fuels and their replacement with unworkable “green or renewable” power schemes.  This is described in the Abstract section of this website.

As pointed out in my essay, “Funding the Climate-Industrial Complex,” the annual worldwide cost of this climate change deception is over 2 trillion dollars. And what is the return on investment? Virtually zero.

Anthropogenic global warming (AGW,) sometimes referred to as manmade climate change, is the largest lie, fraud, and deceit, ever perpetuated by man against mankind. Unfortunately it is very complicated and complex for non-scientists to understand. Thus the average person does not attempt to analyze and evaluate it and therefore has ambivalent feelings about it. However, the climate change fraud is responsible for trillions of dollars in damages annually…not by weather and climate…but by man’s ill-conceived responses such as carbon taxes, the green energy scam, and countless government programs taking taxpayer dollars in the name of climate change mitigation.

A concrete example of climate alarmism absurdities are the 1,500 frivolous climate related lawsuits worldwide. Over 1,250 of these lawsuits are in the United States. Collectively more than $100 billion dollars are sought by the plaintiffs in these suites against a multitude of energy companies and suppliers.

There is a fundamental misunderstanding regarding the quantum effects of infrared absorption in bipolar gases such as H2O (water vapor), CO2, CH4, etc. made by people who claim that the infrared absorption and radiated emissions of “greenhouse gases” is not true. This does a disservice to the battle against climate alarmism.

These gas molecules do in fact absorb Infrared energy at specific wavelengths. However they emit that enormously small burst of “heat” within 5X10-15 seconds. And most of that emitted kinetic energy is lost in inelastic collisions with other gas molecules such as nitrogen or oxygen in the atmosphere or lost to space.

Having said the above, these greenhouse gases do not create any statistically relevant or measurable warmth on the Earth from the energy they received reflected from the Earth which originally came from the Sun. To do so would violate the fundamental law of conservation of mass and energy (energy is neither created nor destroyed; but simply changed from one form such as mass to another form such as energy, as formulated by E=MC2.)

The problem is to describe this in terms that non-scientists, politicians, policy makers, media reporters, and average people can understand. This is simply not possible today because of the extremely poor science education these people have had. It is an impossible battle to fight the fraudulent notion of AGW/climate change based on the IR emissions issue and the transfer of “heat.” Those arguments will not win this debate no matter how scientifically accurate and correct they are.

Other arguments in the debate attempt to explain…if not prove…what natural variations and effects cause climate change. These include the movement in the orbits of large near space objects such as the sun, moon and major planets. These movements cause perturbations in air and tidal movements on the Earth which alter climate. Small variations in the energy output of the sun also cause measurable changes over time as do volcanic eruptions, tectonic movements and even meteor strikes. But again, these simple scientific facts simply are not covered properly in today’s elementary and secondary level science classes.

What can and will win the debate is to prove the true nature of “carbon cycle”…CO2 formation and absorption in the biosphere. This involves Henry’s law and Raoult’s law, and the difference between carbon dioxide flux and flows. Furthermore it involves ocean chemistry. But all of this is also beyond the comprehension of Civis Americanus and their cousins worldwide.

This alone falsifies AGW. Why? Because AGW is based on the mistaken concept that man-made CO2 from hydrocarbon fuel use and cement production is large enough to create redundant heat transfer to the Earth (based on the incorrect greenhouse gas emissions and heat transmission theory). Yet we just said that man’s contribution to total gaseous CO2 is 0.001% to 0.09%. Any reasonable man…and certainly learned men…would laugh at this absurd AGW proposition!

Our work will provide this number over the next 6 months to a year. And we will litigate it in court and prevail by way of a multitude of current “fossil fuel lawsuits” in the US.

This will falsify AGW/climate change once and for all.

We are seeking financial contributions by way of equity investment or donations to our 501(c)(3) educational resource. I invite you to read our Pinatubo Study proposal which expands on these concepts and presents our goals and objectives.

A detailed funding proposal is available upon request to tomer@climatecite.com

1 Real time is meant to convey the real world situation. However CO2 is not homogeneously mixed within the atmosphere and both CO2 flows and fluxes move in real time as they are dependent on a multitude of variables.