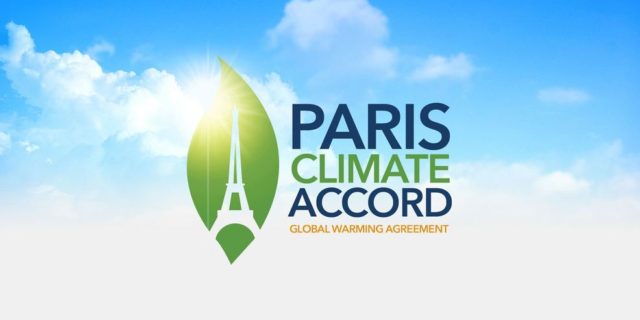 In March 2019, House of Representatives Speaker Nancy Pelosi unveiled the Climate Action Now Act which was a bill that essentially forbids the US withdrawal from the Paris Climate Accords. At the same time Senate Minority Leader, Chuck Schumer announced a new Democratic committee on climate change that would give the Senate a larger climate change forum. The House bill passed the House but not the Senate and the Senate climate change committee went nowhere.

Under President Donald Trump’s order, the US filed its intent to withdraw from the Paris Climate Accords at the earliest possible date, on November 4, 2019. After the one-year period, on November 4, 2020, the U.S. formally withdrew from the Agreement, coincidentally on the day following the 2020 U.S. presidential election.

It is a good thing. The Global Energy Institute of the US Department of Commerce says meeting the commitments President Obama made as part of the Paris climate accord could cost the U.S. economy $3 trillion and 6.5 million industrial sector jobs by 2040.

Furthermore the Obama administration committed the United States to pay over 3 billion dollars annually yet the US is only responsible for 15% of CO2 emissions. Collectively, China, India, and Russia are responsible for 40% of such emissions yet they are required to make no payments until 2030. Once again the US is suckered into paying for most of the entire world’s alleged sins.

Recently however, Senator Schumer along with president elect Joe Biden have stated that the first priority of the new administration will be to re-enter the Paris agreement. Senator Schumer points to the recent forest fires on the West Coast of the United States and those in Australia as prima facie evidence for that decision.

In what has become an annual seasonal tragedy, both in the US and Australia, wildfires have recently destroyed natural forests. Millions of acres and millions of animals have been incinerated. Dozens of parents and children have been killed.

Joe Biden recently said: “If you give a climate arsonists four more years in the White House why would anyone be surprised if more of America is ablaze.” Nancy Pelosi exclaimed “Mother Earth is angry! She is telling us with hurricanes and fires that the climate crisis is real.”

But is that scientifically and factually true?

California Governor Gavin Newsome said in an appearance with President Trump: “Manmade climate change is real. If you don’t believe in science come to California and observe it with your own eyes.” Washington State governor Jay Inslee agreed. “These are climate fires. We can and will not surrender our state and expose people…because of climate fires.”

This is ideological nonsense, intended to deflect blame and avoid responsibility for decades of public policy errors and poor forest mismanagement, and to justify new laws that would multiply government control over energy, industries, jobs, living standards, lives, property and freedom to choose where and how we live.

Because timber harvesting and thinning have been banned for decades, thousands of scrawny trees grow on acreage that should have just a few hundred full-sized mature trees. As of 2017, tens of billions of scrawny trees mix with 6.3 billion dead trees in 11 Western states; state and federal forests in California alone had over 129 million dead trees. Those numbers have most assuredly skyrocketed since 2017, while steadily increasing dry brush and debris now provide even more tinder for super-heated conflagrations.

Most of this heat goes upward, but super-high temperatures incinerate endangered wildlife – as well as organisms and organic matter in thin western soils that for decades afterward can support only weeds, grass and stunted, spindly trees. Western conflagrations jump fire breaks because these ferocious fires are fueled by the unprecedented increase in combustibles that radical environmentalist policies have created.

These monstrous fires generate their own high winds and even mini tornados that carry burning branches high into the air, to be deposited hundreds of feet away, igniting new fires.

None of this has a thing to do with climate change. To say a 0.1, 0.5 or even 1.0 degree change in average global temperatures would alter these forest fire dynamics defies credibility. To say the monumental fuel buildups in our forests are irrelevant is like claiming a minimally furnished home will burn as easily and ferociously as one filled to the brim with furniture, books, old newspapers and cans of gasoline.

The solution is simple, though expensive and time-consuming at this point. Cut the red tape. Remove some of that fuel, so that fires don’t get so big, hot, powerful, and destructive. Clear wider areas around buildings, homes and communities. Create more, wider fire breaks. Build more roads that let people escape the flames. Send the timber to sawmills, to create jobs and tax revenues, and American lumber for affordable homes. Clear out brush and grass under transmission lines – and upgrade the transmission lines. Bolster rapid-response airborne and ground-based firefighting capabilities.

In contrast to Nancy Pelosi’s “angry earth” claims and those by the mainstream media, there has been no increase in total Atlantic hurricane activity in recent decades. As a matter of fact, world-wide there has been a 5–10% decrease in hurricane-type storms in the last 50 years.

What we do know is that in 2020, with satellites and reconnaissance planes, 10 baroclinic storms developed in the subtropical Atlantic, of which 2 were east of 50W longitude. These 2, combined with 3 other African systems that weakened, make 5 in the Eastern Atlantic. A fair comparison of the 1933 hurricane season with 2020 would be to reduce the number of storms in 2020 by around 10. If we do that, 1933 is still the most active hurricane summer in modern times.

Noted scientists and professor emeritus, USC, Dr. George Chilingar, who is author of 72 books on science, five on climate change, and over 500 scientific papers puts it very clearly: “Carbon dioxide (CO2) in the atmosphere does not cause any warming; rather it causes slight cooling.” His landmark peer reviewed paper, “Cooling of atmosphere Due to CO2 Emission”, Chilingar, Khilyuk, et al., provides scientific and mathematical proof.

Even NASA recently admitted that the Sun may be the major source of “climate change” on the Earth.

Our planet is over 4.5 billion years old and it has had an atmosphere for almost 4 billion years. Over that time, the levels of carbon dioxide have varied greatly from as much as 15 times the current level. President Trump’s chief science advisor on climate has noted that today we are in a carbon dioxide draught.

Perhaps most telling of all is the fact that the Mona Loa Keeling curves which climate alarmists use to track CO2 levels daily has continued to rise over the last 8 months of the “pandemic” yet energy consumption from fossil fuels has decreased by 30% from pre pandemic levels! This virtually proves that manmade climate change is a falsehood. Where does this carbon dioxide really come from? The gasification of CO2 dissolved in the ocean as the seas warm which, of course means temperatures increase before carbon dioxide levels increase.

President Trump is correct. Anthropogenic Global Warming (AGW) or climate change is a hoax. A hoax meant to lead the country into socialism and to force spending of tens of trillions of dollars in the “Green New Deal” pipe dream while killing our fossil fuel infrastructure.

Spending $3 billion dollars per year subsiding the UN’s climate propaganda and risking an additional 3 trillion American dollars over the next thirty years is just plain ludicrous. We must not allow re-entry into the Paris Climate Accords under any circumstances.