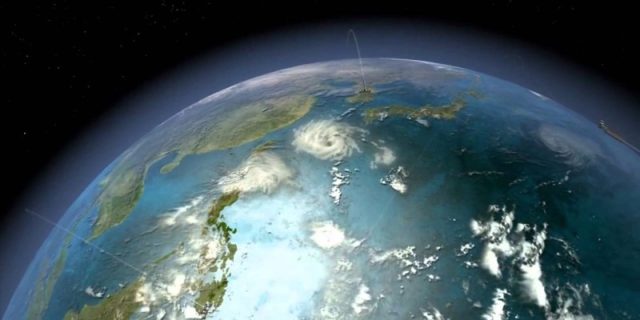 More than 10 years ago, Dr. Roy Spencer explained (1) in detail with examples why the climate models are wrong.  All models were overstating climate sensitivity to greenhouse gases.  The models were all (at the time) too sensitive to radiative forcing because they had misunderstood feedback processes, that is, feedback is an effect of radiative forcing, not a cause.  His blockbuster revelation was that ALL feedback from radiative emissions from greenhouse gases is negative.

This note confirms Dr. Spencer’s conclusion at the molecular level.  In the troposphere, the layer of air closest to earth’s surface, a greenhouse gas molecule, for example CO2, re-emits the long wave infrared radiation (LWIR) it absorbed from earth’s surface on average in about 300 picometers (0.00000001181102 of an inch) when it collides with another air molecule.  But, when that emitted radiation is absorbed by another greenhouse gas molecule or earth’s surface, the radiation intensity is reduced by at least 50%, and so on for all subsequent absorption-collision-emission events.

In other words, radiative emission of LWIR from greenhouse gases is negative feedback, a cooling process not a warming process, resulting from the forcing of LWIR emissions up-dwelling from earth’s surface.

Long wave infrared radiation emitted and up-dwelling from the earth is broad spectrum IR radiation and varying in intensity, radiating from a bulk source on the surface which is usually continuing to radiate over some extended time interval.

After a single radiative absorption event, the radiation from a molecule of greenhouse gas is emitted in a distribution spread across 3D space as determined by steradian geometry.  Multiple other greenhouse gas molecules at different distances could absorb some of that radiation, or the earth’s surface could absorb some of that radiation, or the liquid and aerosol water in clouds could absorb some of that radiation, and some radiation could be transmitted to outer space.  Every subsequent absorption event in the cascading series of absorption-emission-absorption events following the initial pulse of radiative emission from earth’s surface receives much less intense radiation than the absorption event that preceded it, never more intense radiation.  This means that all feedback from radiative emission from greenhouse gases are negative (cooling) events, in agreement with Dr. Roy Spencer (1).  Energy is being distributed in progressively lower amounts.  There is no warming after the initial LWIR from the surface.  Increasing the concentration of greenhouse gases (dominantly water vapor and clouds and minimally CO2) delays the rate of cooling by 3D steradian distribution of the LRIR radiation.

When the emitting greenhouse gas is very close to earth’s surface at least 50% of its emission is radiated away from the surface at varying steradian angles, and about 50% is radiated toward the surface at varying steradian angles.  Radiative emission intensity from water vapor and clouds will always be significantly less than the radiation absorbed by the water vapor and clouds from the earth’s surface.  Down-dwelling LWIR cannot warm the surface.

Radiative re-emission or feedback from a cloud or greenhouse gas can never warm the surface or the object or the molecule that was the source of that radiation, consistent with the laws of thermodynamics.  The source will always be at a much higher intensity than the feedback re-emitted radiation.  As the re-radiating molecule moves farther from the source of the LWIR, the 3D steradian angle increases, which further reduces the intensity.  Feedback from greenhouse gases such as CO2, methane, clouds and water vapor results in a time delay in cooling and reduction in intensity of the long wave IR radiative emissions.

In Summary, greenhouse gases are distributing energy rather than trapping energy.  Radiative emissions from greenhouse gas molecules are spread over 3D space and spread over time.  LWIR radiation from earth’s surface is delayed on its path back into outer space.  This is delayed cooling, not warming, like wearing a stocking cap on a cold day.

Climate models yield incorrect answers in part because they assume a priori that feedback from greenhouse gases causes warming.  Thus the models always overstate sensitivity to radiative emissions, CO2 concentration, water vapor, clouds and methane concentration.  Climate modelers built greenhouse gas warming into their models.  Michael Mann, Benjamin Santer and other scientists admitted in their 19 June 2017 paper in Nature Geoscience, “In the early twenty-first century, satellite-derived tropospheric warming trends were generally smaller than trends estimated from a large multi-model ensemble,” reads the first line of the abstract. “Over most of the early twenty-first century, however, model tropospheric warming is substantially larger than observed,” they added.  In other words, the warming observed in real world temperature trends was “substantially” less than predicted by their climate models. (2)

Absorption and emission events in gases are not by and of themselves thermal events or heat.  Neither the increase in energy due to absorption nor the decrease in energy due to radiation have changed the ability of the molecule to do work.  Unless some other condition occurs, usually a collision, the greenhouse gas molecule is in thermodynamic equilibrium and in a natural, reversible state.  Radiative absorption and emission in gases are changes in the motions of atoms and electrons/bonds within a single molecule.  These are changes in potential energy, not kinetic energy.  Thermal energy or heat is molecular motion, that is, directional motion of the entire molecule, or kinetic energy.  Thermal energy is the molecule either moving at a velocity through space or the entire molecule vibrating or moving in contact with other molecules in a liquid or solid matrix.  The radiative energy absorbed by greenhouse gas molecules causes already ongoing (i.e. ground state) vibrations of atoms and bond/electrons within the gas molecule to be increased by a discrete amount.  The stretching and or bending oscillations/vibrations become higher frequency and farther; the outer electron shell expands.  After a collision, or a change in condition such as the temperature or altitude, the gas molecule will emit that radiation at almost the same wavelengths and intensity in which it was absorbed, except the emission is into 3D steradian space but it was received in a discrete pencil-like or tube-like beam.  Under certain conditions, for example very high pressure, there can be an extremely small amount of radiation emitted as scatter.  It is not the gas molecules that are vibrating in space but it is the atoms and bonds/electrons inside the molecule which are vibrating.  After the gas molecule emits its discrete quanta of radiation, it relaxes to its ground state vibrations, which are determined by temperature and pressure of the surrounding air.

Absorption and emission events are not in and of themselves thermal or heating events. The gas molecules do not change kinetic direction velocity as a result of absorption or emission.  Collisions change kinetic energy which in turn usually causes emission of the energy held in the elevated state of internal vibration.  The tropopause is the boundary between the troposphere and stratosphere. In the upper atmosphere above the tropopause, molecules are much farther apart, air is less dense, air pressure is lower, and CO2 spontaneously emits LWIR because its elevated energy state is out of thermodynamic equilibrium with the surrounding near vacuum.  There is little water vapor and clouds in the stratosphere and in the other atmospheric layers above the tropopause which could block the LWIR emissions from CO2 into space.  More than 50% of that radiative emission from CO2 will go into outer space.  Again, radiative emission from CO2 is a cooling effect; the temporary absorption of LWIR by CO2 gas molecules is a delay in cooling.