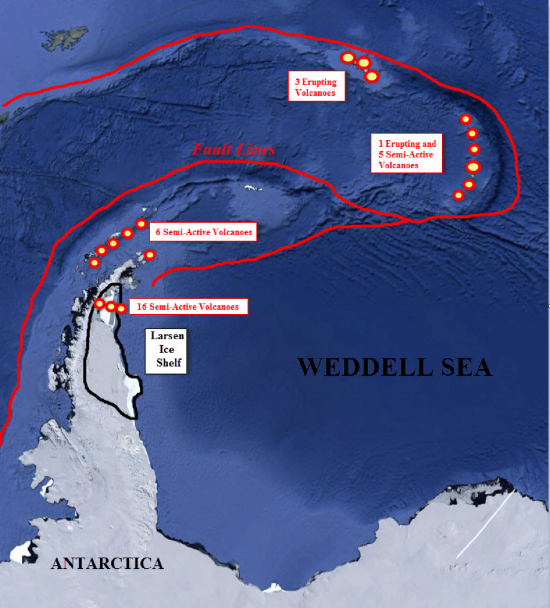 This ice shelf break-up process has been the focus of an absolute worldwide media frenzy contending man-made atmospheric global warming is at work in the northwest peninsula of Antarctica. As evidence, media articles typically include tightly edited close-up photos of cracks forming on the surface of the Larsen Ice Shelf (Figure 2) accompanied by text laced with global warming alarmist catch phrases. This “advertising / marketing” approach does in fact produce beautiful looking and expertly written articles. However, they lack subsidence, specifically a distinct absence of actual scientific data and observations supporting the purported strong connection to manmade atmospheric global warming.

Working level scientists familiar with, or actually performing research on, the Larsen Ice Shelf utilize an entirely different approach when speaking about or writing about what is fueling this glacial ice break-up. They ascribe the break-up to poorly understood undefined natural forces (see quote below). Unfortunately, comments by these scientists are often buried deep in media articles and never seem to match the alarmist tone of the article’s headline.

“Scientists have been monitoring the rift on the ice shelf for decades. Researchers told NBC News that the calving event was “part of the natural evolution of the ice shelf,” but added there could be a link to changing climate, though they had no direct evidence of it.” (see here) 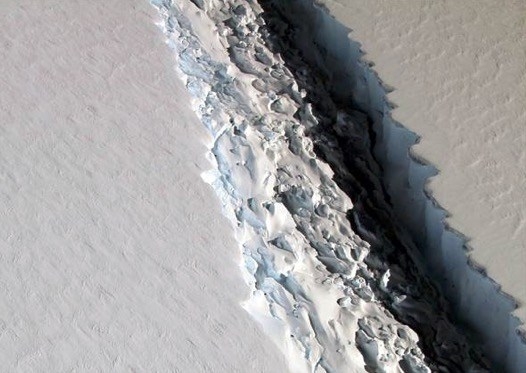 This article discusses what more properly explains what is fueling the Larsen Ice Shelf break-up. A theory that is supported by actual scientific data and observations thereby strongly indicating that the above mentioned undefined natural forces are in fact geological.

Let’s begin by reviewing the map atop this article (Figure 1). This map is a Google Earth image of the local area surrounding, and immediately adjacent to, the Larsen Ice Shelf, here amended with proven active geological features.

If ever a picture told a thousand words this is it. The Larsen Ice Shelf lies in and among: twenty-six semi-active (non-erupting but heat-flowing) land volcanoes, four actively erupting land volcanoes, two proven semi-active seafloor volcano (seamounts), and a proven actively heat flowing major fault system named the West Antarctic Rift. Not shown on this map are known seafloor hydro-thermal vents (hot seafloor geysers), likely heat emitting fractures, and prominent cone-shaped seafloor mountains that are most likely seamounts (ocean volcanoes). This geological information paints a very clear and compelling picture that the Larsen Ice Shelf is positioned in an extremely active geological setting. In fact a strong case can be made that the Larsen Ice Shelf owes its very existence to a down-faulted low valley that has acted as a glacial ice container (see research on the Bentley Subglacial Trench of the West Antarctic Rift / Fault).

Next let’s review in more detail a few of the key very local areas on the Figure 1 map which will help clarify the power and recent activity of these areas.

First up, the Seal Nunataks area which is labeled on the Figure 1 map as “16 Semi-Active Volcanoes”.  In general, these volcanoes lie within and push up through the northern portion of the Larsen Ice Shelf (Figure 3). More specifically, the Larsen Ice Shelf is formally divided into three sub-areas: northern “A” segment, central “B” segment, and southern “C” segment. The 16 Seal Nunataks‘ volcanoes are strongly aligned in a west to east fashion and are designated as the boundary between the Larsen “A” and B” segments. This 50-mile-long and 10-mile-wide chain of visible land volcanoes has likely been continuously volcanically active for at least the last 123 years based on limited amounts of data from this remote and largely unmonitored area. Each time humans have visited this area they have recorded obvious signs of heat and heated fluid flow in the form of: fresh lava flows on volcanoes, volcanic ash on new snow, and volcanic debris in relatively new glacial ice. Remember, these observations only document volcanic activity on exposed land surfaces, and not the associated volcanic activity occurring on the seafloor of this huge volcanic platform. More modern research published in 2014 by Newcastle University is here interpreted to indicate that the Larsen “B” portion of the greater Larsen Ice Shelf pulsed a massive amount of heat in 2002. Research elevation instruments showed that a huge portion of the Larsen “B” area quickly rose up, likely in response to swelling of underlying deep earth lava pockets (mantle magma chambers). This process heated the overlying uplifted ground. This heated ground then acted to bottom melt the overlying glaciers (quote below). This is an awesome display of the power geologically induced heat flow can have on huge expanses of glacial ice.

“Scientists led by Newcastle University in the UK studied the impact of the collapse of the giant Larsen B ice shelf in 2002, using Global Positioning System (GPS) stations to gauge how the Earth’s mantle responded to the relatively sudden loss of billions of tonnes of ice as glaciers accelerated. As expected, the bedrock rose without the weight but at a pace – as much as 5 centimetres a year in places – that was about five times the rate that could be attributed by the loss of ice mass alone”, said Matt King, now at the University of Tasmania (UTAS), who oversaw the work. “It’s like the earth in 2002 was prodded by a stick, a very big stick, and we’ve been able to watch how it responded,” Professor King said. “We see the earth as being tremendously dynamic and always changing, responding to the forces.”  Such dynamism – involving rocks hundreds of kilometres below the surface moving “like honey” – could have implications for volcanoes in the region. Professor King said. (see here) 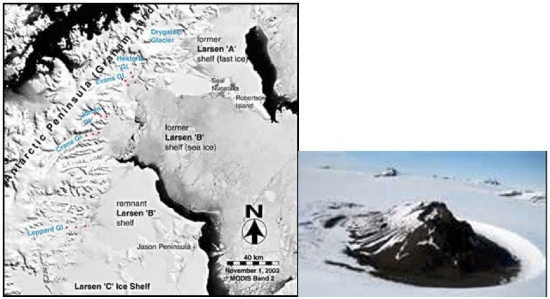 Figure 3  Map of the Seal Nunataks 16 Semi-active volcanoes relative to the three
Larsen Ice Shelf segments, “A”, “B”, and “C” (see here). Also, a historical aerial photo
of several Seal Nunatak volcanic cones pushing up through the Larsen Ice Shelf.

The next key local area on the Figure 1 map is portion labeled as “6 Semi-Active Volcanoes” of which two are seamounts (seafloor volcanoes) and four are land volcanoes. All of these geological features are known to be currently emitting heat and heated fluid flow, however the rate and volume of this flow is not well understood. The most noteworthy feature is Deception Island, which is a huge six-mile-wide collapsed land volcano (caldera). This volcanic feature: extends a great distance outward and downward into the surrounding ocean, has been earthquake active in the years 1994 / 1995 / 1996, and has moderately erupted in the years 1820, 1906 / 1910 / 1967 / 1969 / 1992. Early explorers used the harbor created by this collapsed volcano, however, on occasion they had to abandon their moorings when the seawater in the harbor boiled (see quote below). More modern research stations in the 1960s had to temporarily abandon the island due to moderate eruptions.

“The fifth volcano, off the northern tip of the Antarctic Peninsula, is a crater that has been ruptured by the sea to form a circular harbor known as Deception Island. Beginning in the 1820s, it was used as shelter by sealing fleets from New England and later by whalers. On occasion, water in that harbor has boiled, peeling off bottom paint from the hulls of ships that did not escape in time. An eruption a decade ago damaged research stations established there by both Britain and Chile. This volcano and the two newly discovered ones on the opposite side of the peninsula, the longest on earth, are thought to be formed by lava released from a southeastward-moving section of the Pacific floor that is burrowing under the peninsula in the same process thought to have formed the Andean mountain system farther north, in South America.” (see here)

The last two key local areas on the Figure 1 map are labeled as “1 Erupting and 5 Semi-Active Volcanoes” and “3 Erupting Volcanoes. These two areas represent major currently erupting land volcanoes that are spewing huge amount of ash into the atmosphere, and most importantly, massive amounts of heat and heated fluid flow into the surrounding ocean (see here and here). These ongoing eruptions all lie along, and are generated by, deep earth faulting associated with the northern extension of the West Antarctic Rift / Fault System (red lines on Figure 1 map). The reader is directed to previous Climate Change Dispatch articles detailing heat flow and volcanic activity along this West Antarctic 5,000-mile-long fault system (see here and here)

In summary, huge amounts of research and other readily available information clearly indicates that the Larsen Ice shelf lies within a geologically active region. Media reports that do not mention this aspect relative to the potential cause of bottom melting and subsequent break-up of the Larsen “A”, “B”, and “C” glaciers are best characterized as “Fake News” and not “97% Proven / the Debate is Over” news.

Thankfully there are smaller media venues such as Climate Change Dispatch that provide scientists with a platform to present viable alternative explanations to complicated climate and climate-related events, specifically in this case…. Antarctica’s Larsen Ice Shelf Break-Up is Fueled by Geological Heat Flow and Not Climate Change.