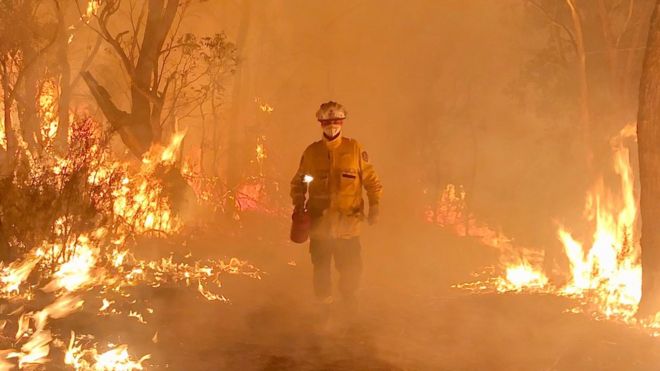 “We are all born ignorant,” Benjamin Franklin once said, “but one must work very hard to remain stupid.”

Greens are incensed over suggestions that anything but fossil fuels and climate change might be turning green California and Australian ecosystems into black wastelands, incinerating wildlife, destroying homes and killing people. The notion that they and their policies might be a major factor in these fires gets them so hot under the collar that they could ignite another inferno. But the facts are there for all to see.

PG&E certainly failed to maintain, upgrade and repair its transmission lines and towers, leading to sparks that caused multiple fiery cataclysms. However, California now has over 129 million dead trees in its forests – and a long history of refusing to thin them out, clear brush or permit others to do so. Fuel levels in Aussie forest, brush and grasslands areas have likewise climbed to near-historic levels in recent years.

The total area burned in New South Wales and Victoria is now approaching the area burnt in Victoria back in 1851, Australian scientist Dr. Jennifer Marohasy notes. 2020 summer temperatures in Australia may get as hot as they did back in 1938-1939. US climatologist Dr. Roy Spencer agrees.

In both California and Australia, people bemoan the loss of eucalyptus trees in fires. But many don’t want them removed or even thinned out. They don’t know (or won’t accept the fact) that fallen eucalypt leaves and bark create vast expanses of flammable material, while their spicy-smelling oil is highly flammable. A spark can ignite an explosive firestorm in air laden with gasoline-like vapors, followed by horrific crown fires among the trees and ground fires in the dead leaves and bark.

Rainy winters in both places cause rapid, lush plant growth that is aided by rising levels of atmospheric plant-fertilizing carbon dioxide. Long, hot, dry summers – or prolonged droughts – can follow, drying out the trees, brush and grass, and setting the stage for catastrophic wildfires.

Environmentalists, politicians, regulators and judges say removing trees and brush will damage habitats. But when the inevitable conflagrations hit, habitats are cremated and obliterated, down to soil organisms and organic matter. Subsequent downpours and snowmelts wash the remaining soil away. What habitats?

Some recent fires could be called “historic” or “unprecedented” – especially if monster fires of a century or more ago are left out of the calculation; or if conflagrations elsewhere are not included. Few people know about the Great Peshtigo, Wisconsin Fire of October 8, 1871, even though it killed 1,200-2,500 people, many of them turned into little piles of ash. The Peshtigo debacle was overshadowed by another big fire that day: the Great Chicago Fire, which burned 98% less land and killed far fewer people.

Yet another fact demolishes the all-too-typical claim that recent Australian fires are due to manmade climate change. Many (perhaps most) of those fires were caused by humans – some accidentally, but many deliberately. More than 180 alleged arsonists have been arrested since the start of the 2020 bushfire season, with 29 blazes deliberately lit in part of southeast New South Wales in just three months!

At least two dozen people have died in Australia’s fires, along with thousands of sheep and cattle, over 2,000 koala bears, and several hundred million other animals. US wildfires have likewise exacted horrific death tolls. A few years ago, Duggan hosted a benefit concert for the families of the Fallen Nineteen, the 19 City of Prescott firefighters who died battling the 2013 lightning-ignited Yarnell Hill Fire in Arizona.

Now, the Washington Free Beacon reports, “a media outlet affiliated with ISIS has been instructing the group’s radical adherents to set forest fires in the United States and Europe to cause mass ecological disasters, according to posts on an internet forum dedicated to the terror group.” The Middle East Media Research Institute has flagged four posters published in the pro-ISIS Quraysh media outlet. The first said (English translation): “Oh monotheists [followers of ISIS], ignite fires in the forests and fields, and we are addressing especially those who live in Europe and America, for the fires are painful to them.” The fourth poster got more specific: “Ignite fires in the forests of America, France, Britain and Germany, for they are painful to them.” Might some ISIS follower have viewed Australia as equally deserving of ecotage?

A recent report by Pulitzer Prize winning Los Angeles Times reporter Bettina Boxall may make greens even hotter under the collar: “Human-caused ignitions spark California’s worst wildfires but get little state focus,” the headline reads. Her key point is damning: “It doesn’t matter how dry the vegetation, how fierce the winds or how high the temperature; if there is no ignition, there is no wildfire.”

Noting that the 2019 California fire season was far less deadly than that in 2018, when the notorious “Camp Fire” destroyed the town of Paradise and killed 86 people, Ms. Boxall attributes the comparatively mind 2019 fire season to actions PG&E took to shut down power to many Californians, often for days. She quotes Stanford University researcher Michael Wara, who testified before a Congressional committee that Pacific Gas & Electric’s inspections of wind damage to its lines and equipment made it clear that, without preventive shutdowns, “we would have had a significant number of utility-caused fires” in 2019.

Boxall found that all of California’s 20 most destructive wildfires were human-related, with half due to power line or electrical problems. She also noted that a study of US records from 1992 to 2012 found that human activity (power lines, carelessness and arson) was responsible for 84% of wildfires and 44% of acreage burned nationwide. That’s the ignition factor. Two other factors are equally important.

Even if there is ignition, if there is insufficient fuel, there will still be no wildfire – at least not monstrous, deadly conflagrations. Thin the forests, remove dead trees, control brush and grass levels, especially in dry seasons and arid regions. It’s basic, intelligent land management; the Boy Scout motto: Be prepared.

Preparation also means maintaining fire breaks and access roads into forest, brush and grass lands; building and maintaining sufficient escape routes and warning systems, and making people aware of them; ensuring that each family and community has an escape plan; and having enough trucks, airplanes, helicopters, other equipment and personnel to respond to average fires and worst-case scenarios. It means educating children and adults about how to prevent fires, put them out, and get out of their path.

(California public schools offer multiple courses on climate change. Cool California lists even more. But as long as politicians and even industry leaders keep spreading the false gospel of climate change as the principal cause of wildfires, the need for personal and political responsibility will be ignored.)

Third, actual response to a fire means ensuring the political, social, financial and institutional support to get sufficient personnel, equipment and water to a fire before it turns into an uncontrollable inferno.

Do all that, and the recovery phase – rebuilding homes, businesses, habitats, wildlife numbers and shattered human lives – will be far less extensive, costly and traumatic. Difficult recoveries will also be minimized by not wasting scarce time and money on fashionable, politically correct, “woke” issues like how many fire fighters are of a specific ethnic or sexual identity group. People and animals in the path of a roaring inferno care only that first responders are prepared, equipped and on time. So should politicians.

Every one of these vital matters is within our power to control – if we can muster the political willpower to take appropriate action. None of them involves climate change.

It doesn’t matter if Earth’s or California’s or Australia’s average annual or summer temperature is 0.1 or even 1.0 degrees warmer. Or that a drought is a day, month or year longer than X. Or whether the climate and weather fluctuations are driven by human or natural forces. Or that America, Australia, Britain, China, India or Indonesia is “not doing enough” to curb fossil fuel use and carbon dioxide emissions.

Climate change did not cause 129 million trees to die in California – or prevent the state and feds from removing the dead trees, thinning the forests, and clearing overgrown brush and grass. Ditto for Australia.

We must play the hand we have been dealt. That means acting responsibly and intelligently to prevent and respond to wildfires under whatever climate, drought, diseased and dead trees, or other conditions exist, wherever and whenever we live. Ben Franklin would be proud of us.

Paul Driessen is senior policy analyst for the Committee For A Constructive Tomorrow (www.CFACT.org) and author of books and articles on energy, climate, environmental and human rights issues. Duggan Flanakin is CFACT’s director of policy research.