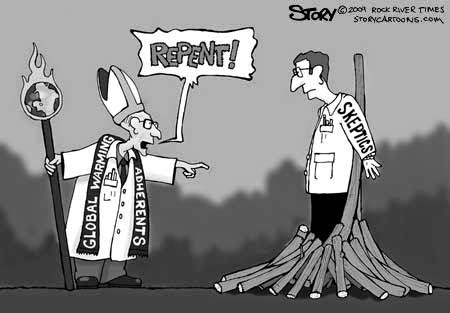 They actually used the word “converts” to describe people who changed their mind about climate change.

How to change the minds of climate deniers

For some people, the awakening comes in science class.

In the Reddit thread titled “Former climate change deniers, what changed your mind?” the most popular comment comes from chucklesthe2nd (probably not his real name). Chuck, as we’ll call him, essentially inherited his dad’s views on climate change.

It looks like Chuck is at the forefront of an encouraging trend. A recent Monmouth poll found that 78% of Americans believe climate change is real and leading to sea-level rise and more extreme weather. That’s up from 70% three years ago. The headline-grabbing takeaway: a majority of Republicans – 64% – are now believers, a 15-point jump from 2015.

To learn more about these converts, researchers at Yale and George Mason crunched the numbers from a blend of responses to surveys conducted between 2011 and 2015. They found that 8% of Americans said they had recently changed their opinion on the matter, according to a new analysis from Yale University and George Mason University. Nearly all of the recent converts said global warming had become a bigger concern for them.

Why is it necessary to be “converted” to climate change belief?

Am I reading too much into use of this word? I suspect not. The climate converts appear to embrace a rigid, harshly intolerant belief system which drives them to try to punish public figures whose stated position deviates even slightly from their views of what is acceptable.

If you’re not sure what “fact mongering” is, the author of the accusation against Lomborg and Pielke provides the following explanation;

Consider a couple of examples, both from the realm of climate science politics where questions of rhetoric, fact, and fear are most crucial. In July 2017, David Wallace-Wells published in New York Magazine an article titled “The Uninhabitable Earth,” arguing that we are not scared enough about climate change. It prompted some denunciations, but also soul-searching among the climate science community about its rhetoric. Perhaps in their desire not to be discounted as fear-mongers, scientists had become fact-mongers. They may have assumed that they don’t really have a “fact” until it is scrubbed clean of all emotion, especially fear. This is certainly not misconduct in a narrow sense, but it may well count as a form of irresponsible research. Has the climate science community hid behind neutral facts and insufficiently scared the public? If so, theirs would be a rhetorical, not a logical, failure. …

Bjørn Lomborg and Roger Pielke Jr. are not climate skeptics. Both of them accept the IPCC position on climate sensitivity to CO2. Their transgression is they question some of the wilder predictions of climate activists, and don’t use emotive language when presenting their research.

Even the founders of the climate movement, people like James Hansen, are not immune to denunciation – Naomi Oreskes called James Hansen a “denier”, because he suggested that renewables alone might not be enough to decarbonise the global economy. James Hansen upset believers by suggesting we might also need nuclear power.

And of course we have children like Chuck, who have been “converted” into detesting the “obnoxious” climate views of their families, thanks to green indoctrination from activist teachers. Growing up is difficult enough, without our school systems deliberately driving a wedge between children and their parents.