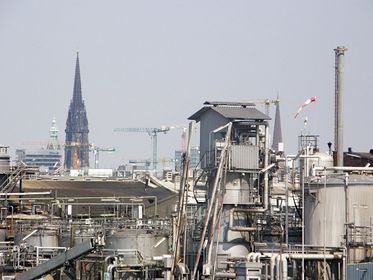 The decision announced by the Federal Network Agency, according to which the coal-fired power station Moorburg will cease power production after 5 years of operation by the operator Vattenfall, will make the power supply in northern Germany a lot less secure. Because on December 31. In 2021, the Brokdorf nuclear power plant will also be shut down due to the Nuclear Energy Phase-Out Act.

After that there are no more large power plants in Hamburg and Schleswig-Holstein that could compensate for the strong fluctuations in wind and solar energy. That was the main reason for the construction of the 1600 MW Moorburg power plant, as the former Mayor Olaf Scholz explained in the remarkable inauguration speech:

“The prosperity of an industrial society depends to a large extent on whether it succeeds in generating or procuring the required energy and keeping it available. In such a way that it is firstly: reliable, secondly: economical, thirdly: sustainable, environmentally friendly, and is available to companies and consumers … Hamburg also and above all has many large electricity-intensive consumers and the city is proud to have them here. She cannot and does not want to do without them. Whether steel, copper and aluminum, but also aircraft construction or science companies such as the German Electron Synchrotron, DESY, they would all have a hard time in Hamburg without a reliable and inexpensive power supply with a high degree of utilization of what we can extract from the earth. “

From the end of 2021, the fate of Hamburg’s electricity supply will depend on five high-voltage lines in the west, east and south of Germany. Hamburg’s industry alone consumes the unbelievably large amount of 11 million megawatt hours of electricity every year. The jug goes to water until it breaks.

Germany, a lucrative export market for electricity in the future? November 2020 will not go down in history as a windy month. This autumn month had to offer two phases with weak winds. They are outlined in red in the Agora chart. 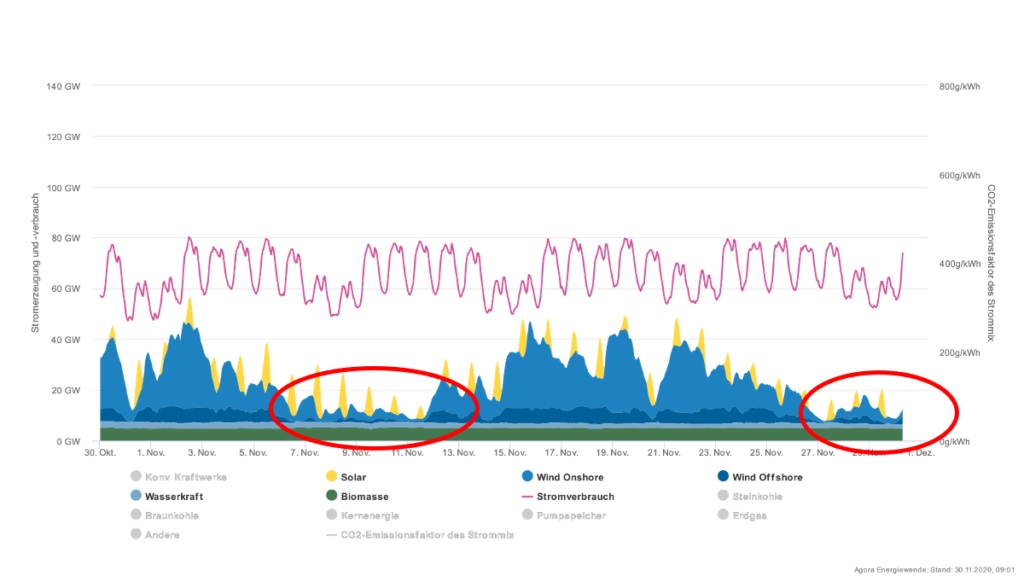 We hope that the expert Claudia Kemfert will reveal her knowledge about storage after all. In an interview on ARTE, she said that these technologies have long been available. The economist will have long since calculated how many storage systems of the type such as the Australian Hornsdale Power Reserve would be needed for Germany to compensate for such phases over days if no other capacities were available. A little tip: The result is a huge amount, quite apart from the fact that it would be a job to get the raw materials for it. But, maybe arithmetic isn’t the economist’s strength at all? In the program DAS (available until February 15, 2021) on NDR television, she amazes with creative mathematics in matters of hydrogen:

“On the way from production to use, you lose up to 80% of the energy, in other words, I would have to put eight times as many wind turbines …”

Well, 80% loss means that only 20% will arrive, of 100% that you put in. A factor of 5 would be correct here if you want to get back to 100% for the end product. Can you know or should you know, because they are actually basics. There are various calculations about efficiency losses in the production of hydrogen with electricity, whether they are actually 80%, that is not certain. The Dresden manufacturer Sunfire assumes an efficiency of 60%, so 40% is lost or, as Claudia Kemfert would calculate, you have to install four times as many wind turbines….

She also stated that the green energies would be able to meet the energy needs in Germany. If you only look at power generation, reality shows (see Agora chart) that this is not possible. 140 GW of nominal power for wind and electricity look good on paper, reality speaks a different language. And we’re not even talking about replacing primary energy here.

With our neighbors in the Netherlands, the discussion is different. The densely populated country simply has hardly any space for wind turbines or free-standing solar panels. That is why nuclear energy is being used there. With astonishing popularity among the population. This also applies to Eastern Europe. Perhaps our neighboring countries are simply expecting good business with future electricity exports to Germany?

Since the creation of the Fridays For Future movement (FFF), the cold sun has been a critical part of it. We have now received a letter with an interview from Carla Reemtsma. It can be found here. It’s from the Faces of Democracy page. We thank the sender.

“Dear Carla, logically everything revolves around democracy, hence our first question to you: What do democracy and democratic values ​​mean for you personally?

Carla Reemtsma: For me, democracy means equal rights for all citizens. Democracy means that everyone has the freedom to live as he or she wants. It enables everyone to participate in all forms of social life. For me, equal rights, opportunities and access are the most important things in a democracy. ”

IN AN INTERVIEW YOU SAY: “COMPROMISES DON’T WORK IN THE CLIMATE CRISIS.” CAN DEMOCRACIES THEN EFFECTIVELY HANDLE CLIMATE CHANGE OR ARE AUTHORITARY REGIMES AN ADVANTAGE HERE?

Carla Reemtsma: The quote has to be seen in context. The Paris climate agreement and thus the agreement on the 1.5 degree target is already a compromise. A gigantic compromise between humanity and itself. It is a compromise between the polluter countries in the global north and the countries in the global south – those who are suffering from the consequences of the climate crisis. Ultimately, it is a compromise that decides nothing less than our livelihood. What we are not allowed to do – and this is what my quote from your question was based on – is to make compromises again with the Paris Climate Agreement itself. So according to the motto: We would rather strive for a target of 3 degrees warming, 1.5 degrees were fixed, let’s just make 2 degrees out of it. That can’t happen. Fridays for Future is democratic, we think and act democratically – that also applies to me personally!

However, authoritarian regimes are not an option to combat the climate crisis. We need intact democracies for climate protection. Fridays for Future is democratic, we think and act democratically – that also applies to me personally. The USA under Donald Trump, but also Brazil under Jair Bolsonaro, are good examples of the fact that populist and authoritarian regimes are the first to write off climate protection when in doubt. Therefore: we need democracies, we need civil society. We need the right to demonstrate and the possibility of protest – so that our demands for climate justice can be heard. “

These statements leave us at a loss. Compromises don’t work in the climate crisis and then in the next sentence: The Paris Agreement is a compromise. Aha, what now? Are they working now or not? Or does she mean weakening a compromise? The activist does not go into the core of the agreement and that is that the agreement explicitly allows some states to reduce their own emissions for 10 years. If the deal was a compromise, it may have been a lazy one.

There is little need to soften up in the sense of a compromise. Emissions will rise because the agreement allows it. However, those who are tangible are beaten. In countries like China or India you don’t hear very much from climate-minded people. We take the statement and the democratic attitude from the young lady, of course, but it does not meet the criticism of the movement. This consists of 2 main points.

1. How are the internal democratic processes at FFF? One reads so little about elections. Who can actually become the movement’s spokesman? Or can anyone who thinks they are? Probably not because you often see the same faces in the media. The loose structure may sound tempting, but viewed from the outside it is not very transparent and therefore possibly not democratic. As hard as Carla Reemtsma tries to dispel doubts here. Who specifically authorized you or Luisa Neubauer to speak for the FFF movement?

2. What about the understanding of democracy in a society? Often enough you read from FFF supporters that they want a system change, but then very rarely explain it precisely. Even Greens like Robert Habeck rave about countries where things can be implemented very quickly. Did he even mean China? Whether a system change means a democracy or another form of citizen participation or even completely different systems is deliberately left open. Or does it mean the change to another economic system of which there are two different varieties in the world: the market economy and the planned economy. One does not know exactly what is going on and as long as these internal and external views are so little transparent, there will always be doubts about loyalty to democracy. In the case of calls for an unspecific system change anyway.

We buy Carla Reemtsma’s basic democratic attitude, but if parts of the FFF movement express themselves differently or unclearly, then that leaves room for interpretation. A large number of groups are currently traveling on the climate ticket. If, however, criminal acts like the one recently committed in the Danneröder forest occur or if third parties are endangered by actions, the right to demonstrate and protest is forfeited. That too is one of the rules of the game in a democracy. The end does not justify every means – not even in a democracy.

Two daily news reports: a trial against Shell begins in The Hague. The group is to be forced by a court to reduce its CO2 emissions by 2030. The author of the article, Jürgen Döschner, you can see the joy of writing, because such processes justify ARD productions like Ökozid again. The corresponding article can be found here.

The environment agency EEA reports that the EU is on course with regard to climate targets. Two out of three goals are on target. From 1990 to 2019, greenhouse gas emissions fell by 24%. 2020 is not yet included in these figures. Read more here.

Brazil’s jungle continues to shrink dramatically. The Reuters news agency reports that deforestation is taking place faster than it has been in 12 years. In this context, we remind you once again of Professor Hans-Werner Sinn’s idea that the EU should buy the Brazilian forest. That might sound crazy at first, but the carbon sinks that are lost year after year are immense. Even a year later, Mr. Sinn’s lecture is still worth watching. An article on this can be found here.

22 wind priority areas approved in East Thuringia. This is the headline of the MDR. 784 hectares of which are located in forest areas. Although this area is not completely cleared, due to the construction of access roads and the area for the foundations, considerable parts of it. For comparison, the Danneröder forest is less than 30 hectares that should give way. For the forest in Thuringia, however, it is unlikely that activists will go to tree houses or abseil off highways. We have already reported on good trees and bad trees. Amazingly, the CDU is currently introducing an amendment to the Forest Act in parliament and not the parties that have made the climate a priority.