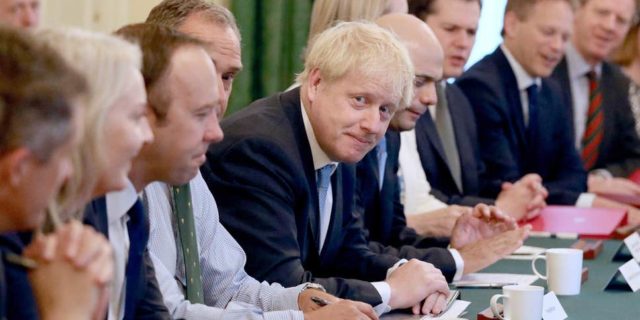 Exclusive: The signatories are part of a network pushing for environmental deregulation after Brexit – and some have links with Boris Johnson’s cabinet

Hundreds of climate change deniers including academics, politicians and lobbyists are to launch a campaign to stop commitments to net zero carbon emissions being enshrined in law, The Independent can reveal.

A letter titled “There is no climate emergency” – which has been signed by 400 people who deem climate change to be a myth – is being sent to leaders of European Union (EU) and United Nations (UN) institutions in the coming weeks ahead of key environment talks.

The group will take further steps, which are to be outlined in press conferences in Oslo, Brussels, The Hague and Rome.

The climate deniers are connected to a transatlantic network of think tanks pushing for environmental deregulation after Brexit, which also have a history of climate science denial.

The letter, obtained by investigative non-profit news organisation DeSmog, shows the group has links with members of Boris Johnson’s Cabinet.

The “European Declaration” letter claims current changes in the climate are “expected from the cyclic behaviour of the climate system”. It also says there is “no proof” that carbon dioxide is a major driver of climate change.

There are two signatories associated with the Cato Institute – who left the think tank in May – and several signatories from the Heartland Institute in the US, both of which are part of the Koch-funded Atlas Network. UK-based free-market organisations such as the Institute of Economic Affairs (IEA), Adam Smith Institute (ASI), and Taxpayers’ Alliance also belong to the network.

Matthew Elliot – who is now reported to be advising Chancellor Sajid Javid – founded Taxpayer’s Alliance. An old employee of Taxpayer’s Alliance, Chloe Westley, has also joined Mr Johnson’s team at No 10. Liz Truss has appointed two special advisors from the IEA and ASI.

The group’s “urgent message” is that the EU net-zero carbon goal – a policy that was blocked by Poland and three other member states in June – should be “strongly opposed”.

“There is no climate emergency and therefore no cause for panic and alarm … Our advice to political leaders is that science should aim at significantly better understanding the climate system while politics should focus on minimising potential climate damage,” the letter reads.

Robert Brulle, professor of sociology at Drexel University and an expert on climate science denial, told DeSmog it looked like a panicked response to the significant media coverage on the climate crisis after influential protests by Extinction Rebellion and Greta Thunberg.

“The talking points are stale and patently scientific nonsense. That isn’t critical. The point would be to keep the ‘contested’ nature of climate change alive,” he said.

Geoffrey Supran, a postdoctoral fellow at Harvard University, said he thought the move was an attempt to distract efforts to increase action at the UN Climate Action Summit at the end of the month.

He said: “As always, they presumably hope to muddy the waters of public and political discourse on the climate crisis – to feed the echo chamber of sympathetic right-wing media and blogs, and to prey on naive and unsuspecting journalists who may be tempted to exercise false balance in their climate coverage.”

The campaign is being run by a Netherlands-based climate science denial group called the Climate Intelligence Foundation (Clintel). It was founded by Guus Berkhout who began his career at Shell and set up the Delphi Consortium in the 1980s to work on new ways to extract oil and gas. He says there are “a lot of great names on the list” and that they all give a “valuable contribution to the climate debate”.

One signatory is Northumbria University’s Professor Valentina Zharkova, who gave a lecture last year saying climate change is caused by solar cycles. She co-authored a paper on the subject that was published in June and criticised for containing “basic errors”. The journal has said that it has commenced an “established process” to investigate the paper it has published.

Other signatories of the letter include directors and former directors of oil and gas companies as well as five fellows of the Geological Society of London, a professional body that represents Earth scientists.

The letter also coincides with government meetings in Germany on 20 September on how the country will meet its 2030 emissions target.

Mr Berkhout confirmed the letter was real. He told The Independent: “The initiative aims at a lot more than providing a declaration. We will reveal our ambitions and plans in a series of press conferences in Europe, starting in Brussels, Oslo and Rome.”