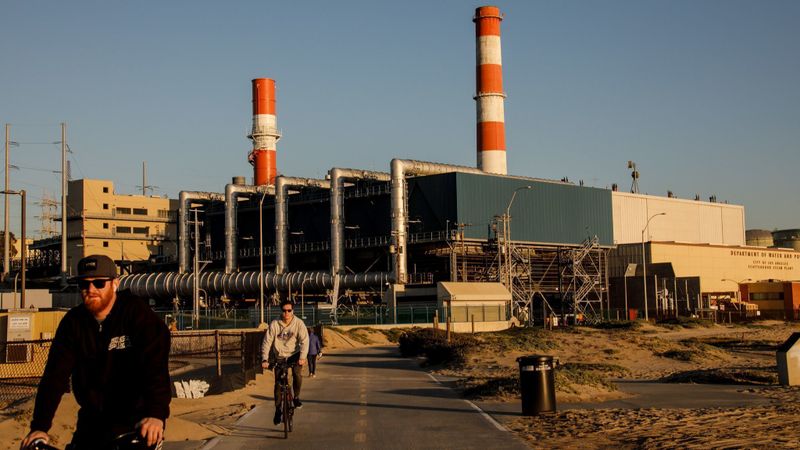 The mayor’s decision marks an abrupt change of course for the Los Angeles Department of Water and Power, where top staffers have argued in recent months that the gas plants are critical to keeping the lights on in the city. Environmental groups have urged DWP to replace the aging facilities with cleaner alternatives, saying the gas-fired plants need to go because they contribute to climate change and local air pollution.

Los Angeles has steadily moved away from coal for electricity, divesting from the Navajo plant in Arizona three years ago and announcing plans to stop buying power from Utah’s Intermountain plant by 2025. But with coal, the most polluting fossil fuel, now nearly removed from the city’s energy mix, it’s time to start planning for a future with zero planet-warming energy sources, Garcetti said Monday — and that means no natural gas.

“This is the Green New Deal,” he added, referring to the sweeping climate change policies championed by Rep. Alexandria Ocasio-Cortez (D-N.Y) and endorsed by several contenders for the Democratic presidential nomination. “Not in concept, not in the future, but now.”

The mayor’s decision comes several months after state lawmakers passed a bill requiring California to get 100% of its electricity from climate-friendly sources by 2045, up from a previous target of 50% renewable by 2030.

A slate of environmental groups had argued that investing in the Los Angeles gas plants would be inconsistent with that goal, and had urged Garcetti and DWP not to rebuild the Scattergood, Harbor and Haynes power plants along the coast. The city is under state orders to shutter 10 gas-fired generating units at those facilities in the coming years because they use ocean water for cooling, which can harm marine life.

The Scattergood and Harbor gas plants sit in communities with some of the worst pollution in California, state data show. Scattergood is in El Segundo, just south of Los Angeles International Airport, and Harbor is in Wilmington by the ports of L.A. and Long Beach.

As recently as December, DWP management signaled support for replacing some of the gas-fired generators with newer, more efficient machines equipped with dry-cooling technology that doesn’t use ocean water. Utility officials had said that batteries charged with solar or wind power aren’t yet cheap or reliable enough to replace the gas plants, without increasing the risk of power outages among the 4 million people served by DWP.

A team of consultants hired by the city-run utility had recommended rebuilding seven of the 10 ocean-cooled units, and replacing the other three with a combination of energy storage, solar power and energy efficiency. The consultants estimated the cost of those projects, plus the gas turbine replacements, at $3.4 billion — more than a billion dollars higher than the estimated $2.2-billion cost of rebuilding all three gas plants.

That plan faced pushback from environmental activists and also from one of Garcetti’s appointees to DWP’s board of commissioners, Aura Vasquez. At a board meeting last month, Vasquez pressed utility staff to look beyond gas plants and embrace batteries and other new technologies as a means of providing reliable power.

“We are in uncharted territories. I get it. We are in a new era. We are headed to renewables that some might view as unreliable,” Vasquez said. “I’m trying to figure out how to reinvent the way that we do business.”

Garcetti said his office concluded that Los Angeles wouldn’t have trouble keeping the lights on if Scattergood is retired by 2024 and Haynes and Harbor by 2029, as long as DWP keeps investing in batteries and other clean energy technologies. He said he asked DWP’s top managers to “shift their thinking.”

“Instead of saying all the reasons why not, get to a reason as to why,” Garcetti said.

Alexandra Nagy, an organizer with Food and Water Watch, which has urged DWP not to keep investing in gas, said Garcetti is “showing the rest of the country what a Green New Deal can mean for our communities.”

“We are hopeful that this is a first step to swiftly transition L.A. off fossil fuels and move the city to 100 percent renewable energy by 2030,” Nagy said in a statement. “It’s time to clean up our air, prioritize healthy communities and green jobs, and usher in a clean energy revolution.”

Some of the sharpest criticism of DWP’s original plan came from S. David Freeman, a former DWP general manager who has led public power agencies across the country and advised presidents Lyndon Johnson, Richard Nixon and Jimmy Carter on energy. At the same board meeting last month, the 93-year-old, cowboy-hat-wearing industry veteran accused DWP officials of ignoring the real and growing costs of climate change.

“This is public power. You’re the voice of the people,” said Freeman, who now works with environmental groups to advocate for renewable energy. “And I think that any poll of the people of Los Angeles reveals that they want you to pay real, real good attention to the climate issue, and not be what I would call an ‘intelligent denier,’ which is what you are if you don’t take the actions that the climatologists say we must take.

“It’s not a question of wanting to or it being convenient,” he added. “It’s just as important as keeping the lights on and keeping the rates down.”