The Michael Mann “Hockey Stick” is suddenly back in the news. It’s been so long since we have heard from it, do you even remember what it is?

The “Hockey Stick” is the graph that took the world of climate science by storm back in 1998. That’s when Mann and co-authors Raymond Bradley and Malcolm Hughes published in Nature their seminal paper “Global-scale temperature patterns and climate forcing over the past six centuries.” A subsequent 1999 update by the same authors, also in Nature (“Northern Hemisphere Temperatures During the Past Millennium: Inferences, Uncertainties, and Limitations”) extended their reconstructions of “temperature patterns and climate forcing” back another 400 years to about the year 1000. The authors claimed (in the first paragraph of the 1998 article) to “take a new statistical approach to reconstructing global patterns of annual temperature . . . , based on the calibration of multiproxy data networks by the dominant patterns of temperature variability in the instrumental record.” The claimed “new statistical approach,” when applied to a group of temperature “proxies” that included tree ring samples and lake bed sediments, yielded a graph — quickly labeled the “Hockey Stick” — that was the perfect icon to sell global warming fear to the public. The graph showed world temperatures essentially flat or slightly declining for 900+ years (the shaft of the hockey stick), and then shooting up dramatically during the 20th century era of human carbon dioxide emissions (the blade of the stick).

In 2001 the UN’s IPCC came out with its Third Assessment Report on the state of the climate. The Hockey Stick graph dominated, appearing multiple times, including being the lead graph in the “Summary for Policy Makers” that is the only part of an IPCC report that anyone reads. Here is the version of the Hockey Stick graph that appeared the the SPM of the IPCC’s Third Assessment Report:

Now that is seriously scary! The Medieval Warm period — an era between the years of about 1000 and 1300 once generally accepted to have had temperatures warmer than the present — had disappeared. The clear implication was that the earth had had a benign and unchanging climate for about a thousand years, and now humans had entered the picture with their fossil fuels and were rapidly destabilizing the situation.

I’m going to provide an overview of what has happened since, but first, here’s the latest. A prominent skeptical climate scientist in Canada named Tim Ball accused Mann of fraud in generating the Hockey Stick graph. The famous quote, from a February 2011 interview of Ball, was “Michael Mann should be in the State Pen, not Penn State.” In March 2011, Mann sued Ball for libel, focusing on that quote, in the Supreme Court of British Columbia in Vancouver. Here is a copy of the Complaint. (Note: In British Columbia, the Supreme Court is not the highest appellate court, but rather the trial-level court for larger cases.) The case then essentially disappeared into limbo for eight plus years. But on Friday, August 23, the British Columbia court dismissed Mann’s claim with prejudice, and also awarded court costs to Ball. As far as I can determine, this was an oral ruling, and no written judgment nor transcript of the ruling yet exists. I have asked Ball to send them along as soon as they exist.

The story of Ball’s vindication, and of Mann’s shame, is a somewhat long one, and turns on Mann’s flat refusal to share publicly the data and methodology by which he constructed the Hockey Stick graph. In about 2003 a very talented Canadian mathematician named Steve McIntyre began an effort to replicate the Mann/Bradley/Hughes work. McIntyre started with a request to Mann to provide the underlying data and methodologies (computer programming) that generated the graph. To his surprise, McIntyre was met not with prompt compliance (which would be the sine qua non of actual science) but rather with hostility and evasion. McIntyre started a blog called Climate Audit and began writing lengthy posts about his extensive and unsuccessful efforts to reconstruct the Hockey Stick. Although McIntyre never completely succeeded in perfectly reconstructing the Hockey Stick, over time he gradually established that Mann et al. had adopted a complex methodology that selectively emphasized certain temperature proxies over others in order to reverse-engineer the “shaft” of the stick to get a pre-determined desired outcome.

Then came the so-called ClimateGate disclosures in 2009. These were emails between and among many of the main promoters of the climate scare (dubbed by McIntyre the “Hockey Team”). Included in the Climategate releases were emails relating specifically to the methodology of how the graph was created. From the emails, skeptical researchers were then able to identify some of the precise data series that had been used by Mann et al. Astoundingly, they discovered that the graph’s creators had truncated inconvenient data in order to get the desired depiction. A website called Just the Facts has a detailed recounting of how this was uncovered. As a key example, consider this graph: 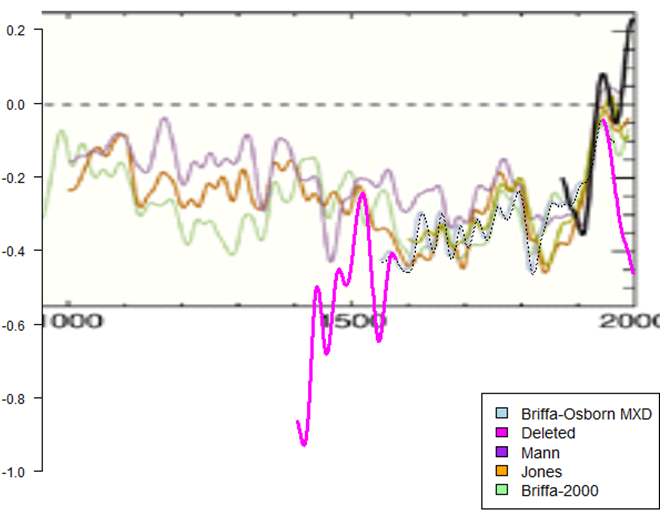 The bright pink plus the dotted line in between the two pink portions shows one of the data series used in the construction of the Hockey Stick graph; but the pink portions were deleted when the graph was presented. Obviously, inclusion of these pink portions would have thrown off the nice, flat “shaft” of the stick, while also revealing that this particular group of “proxies” had totally failed at matching the twentieth century rise in temperatures derived from the thermometer record, thus undermining the whole idea that these were valid proxies at all. In other words, Mann et al. had truncated inconvenient data that failed to match the narrative they wanted to present. Most would call this kind of data truncation a clearcut instance of “scientific fraud.”

This was the state of play in early 2011 when Ball uttered his famous line, “Michael Mann belongs in the State Pen, not Penn State.” Mann then immediately sued Ball for libel.

Now, as readers here know, I spent my life in the litigation business. My practice was in the U.S. rather than Canada, but I have good reason to think that many of the basic ground rules would be the same. And one of the basic ground rules is that a plaintiff in civil litigation needs to provide “discovery” to the defendant of whatever factual information is in his possession that would either support or undermine his claims. When Mann brought his case, I was frankly amazed, because it was obvious to me that Ball would request as “discovery” the very data and methods that Mann had been aggressively resisting giving to anyone to check his work. How could Mann’s case survive if he refused to provide this information?

Sure enough Mann absolutely refused to provide the underlying information in the Ball litigation. For better or worse, when a litigant does that, a court will try every possible avenue to try to get the parties to resolve the matter, before it will take the ultimate step of resolving the case against the non-compliant litigant. And that is in fact what happened in the Mann/Ball case. The court repeatedly tried to get an agreement that something would be produced that would satisfy Ball, and repeatedly gave Mann more time to comply. Could this really go on for eight years? In the U.S., that would be extraordinary, but not impossible. Maybe in Canada it is less extraordinary. It appears that in 2017 Mann actually agreed (under court pressure) to produce to Ball within 21 days the key technical information about construction of the Hockey Stick graph that Ball was requesting. But the information was not produced. Undoubtedly there have been multiple returns by Ball to the court since then to enforce compliance, finally seeking the dismissal of Mann’s claims as the ultimate sanction. On Friday, the court granted that relief.

Here’s a twist that is simply beyond belief. On February 17, 2018, the American Association for the Advancement of Science — the largest professional association of scientists in the world, claiming to have more than 120,000 members — gave its supposedly prestigious “Public Engagement with Science” award to none other than Michael Mann. Here is its announcement of the award. Some choice excerpts:

The honor recognizes Mann’s “tireless efforts to communicate the science of climate change to the media, public and policymakers.” In the past year, Mann has had 500 media interviews and appearances and directly reached public audiences via social media. . . . He has also advised actor Leonardo DiCaprio, who spoke about climate change during a 2014 speech delivered to the United Nations.

The AAAS did this in the face of the clear demonstration of Mann’s misconduct from the ClimateGate revelations, and in the face of Mann’s ongoing obstruction of proper discovery in the Ball litigation. This whole “climate” thing is truly unbelievable in how it warps the minds of seemingly sane people.

Anyway, the bottom line is that, after eight long years, Mann’s lawsuit against Ball has been dismissed “with prejudice” — meaning that he has no right to reinstitute the case. Also, the court has said that it will award at least some “costs” to Ball, although the amount has not yet been determined. Presumably, written opinions and a final judgment will follow, and I will update this post with links to those if and when I receive them. I would expect some triumphant claims of vindication from Ball and his supporters. In light of the court’s decision, Mann will be severely constrained in what he can do in response. Hey — why not produce your data and methods?

Will any of this embarrass or rein in the likes of the IPCC, the AAAS, or any of the many mainstream climate-hoax-promoting outlets that continue to publish Mann’s screeds? (Examples: New York Times, USA Today, Washington Post). Don’t bet on it. As of today, I can’t even find any coverage of the court result in any “mainstream” outlet.

Meanwhile, note that this is only a trial court decision. Theoretically, Mann can appeal, and an appeals court might send this back. On the other hand, it’s hard to imagine that, even if an appeals court reverses and sends the case back, that it won’t condition further proceedings on Mann producing his data and methods. I can’t believe that he will ever do that. The only fair inference at this point is that the Hockey Stick is and always was a scientific fraud.