Just when wildfires weren’t enough, we now have people blaming cold weather on a warming climate, which seems quite contradictory. In light of the Arctic outbreak in forecast this coming week, people like Phil Plait (who has since blocked me) took to Twitter (Figure 1) to claim that man-made climate change is causing frigid, Arctic air to be displaced south into the United States, Europe, and Asia.

His argument, which is supported by some climate scientists, suggests that man-made global warming causes the polar jet stream to destabilize causing it to become wavy rather than zonal, sending Arctic air southward into the mid-latitude regions. He also stated that without global warming, the polar air would stay near the north pole. Both of these claims are exactly backwards from reality and are not supported by weather dynamics, the global warming theory, or statistical observations in long-term temperature data.

Cold air outbreaks are generally caused by disruptions in a large scale atmospheric circulation known as the polar vortex which surrounds the coldest air above the North Pole.

Contrary to popular belief, the polar vortex is not unusual, extreme, or a new phenomenon. As Waugh et al., 2016 stated, “they are simply basic features of Earth’s climatology.”¹

There are two main polar vorticies in each Hemisphere, but for sake of time, I’m only going to discuss the one that gets the most attention; the Northern Hemisphere polar vortex. It’s commonly believed that the two polar vortexes, one in the troposphere and the other in the stratosphere, are directly connected as one, but they are in fact quite different (Waugh et al., 2016).¹

While the tropospheric polar vortex remains present all year long (and is stronger during the cool season), the stratospheric circulation only arises during the late autumn, winter, and early spring (Waugh et al., 2016).¹ This is why it’s rare for temperatures to fall far below average in the mid-latitudes during summer.

This cooling causes a dense, cold air mass to form in the Arctic forming the surface “polar highs,” while subsequently lowering the air pressure aloft.

The strong cooling that occurs in the atmosphere over the Arctic strengthens the temperature gradient between the tropics and the North Pole causing winds to flow faster in attempt to balance the large temperature contrast (Waugh et al., 2016).¹ ² The winds flow cyclonically (counterclockwise in the Northern Hemisphere) due to Earth’s rotation.

2. WHAT IS THE REASONING BEHIND THE THEORY THAT CLIMATE CHANGE WILL INCREASE DISRUPTIONS OF THE POLAR VORTEX?

While the theory of increased Siberian snow cover due to sea ice decline (caused by global warming) in the Arctic (Cohen et al., 2014) causes a disruption in the polar vortex later in the cool season is supported with observations, global warming theory does not support increased visits from Arctic air masses, as I’ll discuss later.

The theory simply states that due to sea ice decline in the Arctic, increased snowfall over Eurasia will lead to a stronger Siberian high through albedo and radiational cooling (Cohen et al., 2014).³ The high in turn will produce an upward energy flux into the stratosphere causing sudden stratospheric warming event in December or January, disrupting the cyclonic flow leading to a polar vortex split by January or February.³ ⁴ This theory is indeed supported by both sea ice data and Eurasian snow cover anomalies since 1979.⁴

While global warming theory specifically states that the tropical upper atmosphere should warm the most (Tropical Hotspot Theory)⁵, it’s also expected that the poles, especially the Arctic, warm faster at the low and mid-levels of the atmosphere compared to anywhere else.

A faster rate of change in surface and/or lower tropospheric temperatures in the Arctic versus the tropics would reduce the temperature gradient between the two regions, which is exactly what we have seen. While the anomaly differences have diverged drastically since January 1979 (Figure 6), the gradient between the absolute tropical tropospheric temperatures and Arctic absolute temperatures has been reduced. (Author’s note: I linear regressed the data to show the trend between the two datasets clearly. Obviously, the linear model does not explain the entire rate of change given R2 values are 0.243 for the Arctic and 0.198 for the tropics, respectively.)

While having a conversation through private messaging on Twitter with Dr. Roger Pielke Sr., he confirmed what I already knew…

A reduced temperature gradient between the Arctic, the mid-latitudes and the tropics results in a weaker jet stream. While it’s popular belief that a weaker jet stream produces a wavier jet stream, this is scientifically incorrect. As previously discussed, the temperature gradient is stronger during the autumn, winter, and spring months, which is when we tend to see lobes of cold air penetrate the mid-latitudes; this means that the polar jet stream is strong, not weak. During the summer months, the polar jet stream is more zonal and weaker, which is why we do not typically see significant cool air outbreaks during the summer.

Last, but not least, perhaps the most obvious flaw in claiming that Arctic outbreaks will increase in intensity and frequency in the coming years and decades due to climate change is the very simple fact that these very cold air outbreaks occur every year and have for at least as long as we have temperature data and historical documentation.

Moreover, to make a more compelling argument against climate activists, cold spells have become less common over the last 124 years (at least in the United States where the best long-term surface temperature data exists) due to the very fact that climate change (which I conclude is mostly natural variability) decreases the overall cold air supply, warms the troposphere, and cools the stratosphere.

Raw temperature data from the United States Historical Climatology Network (USHCN), plotted by Alabama State Climatologist, Dr. John Christy, shows that the average number of November through March cold waves lasting at least two days in 27 Midwestern, Mid-Atlantic, and New England states has decreased from around five times per year in the 1890s and 1900s to around three times per year in the last decade (Figure 8).⁶ The trend since the 1970s has been quite similar to the long-term trend, despite a lot of year-to-year variation.

The EPA has a graph (Figure 9) showing the percent of land area in the Lower 48 affected by unusually cold winter temperatures from 1911 to 2016.⁷ Once again, confirming the data complied by Dr. Christy, the trend is considerably negative over the last century, and especially during the 1970s.

While I agree with the background theory presented in Cohen et al., 2014 that Arctic sea ice decline has indirectly contributed to polar vortex disruptions in recent years, I do find it very challenging for anyone to assert that climate change is behind Arctic outbreaks considering that they a.) have solid meteorological explanations, b.) are not supported to occur more frequently by a cooling stratosphere, and c.) have declined in frequency over time.

While I respect the research scientists like Dr. Cohen have conducted, especially because it’s supported fairly well with statistical relationships and mechanisms, I do respectfully disagree with the climate change attribution aspect due to what we’ve been observing in the big picture with the frequency of cold spells.

What is very perplexing to me is not what scientists are saying, but rather the amount of ignorant statements on climate change being touted throughout social media from politicians, journalists, and people like Phil Plait who have no clue what they’re talking about.

I have a strong passion for meteorology, mathematics, and history (just ask Joe Bastardi or Tony Heller). I know quite a bit about each of those three topics because I spend hours upon hours doing research.

There are many things in science and other aspects of life that I am not knowledgeable about, and I don’t claim to be. That’s why I don’t go touting out nonsense about things I know nothing about. I would highly suggest other people who say absurd things about climate change take my dad’s advice; “know a lot about a little, not a little about a lot.” In other words, don’t be an expert in everything, but rather narrow your focus to be an expert on a few things. Always check your facts. 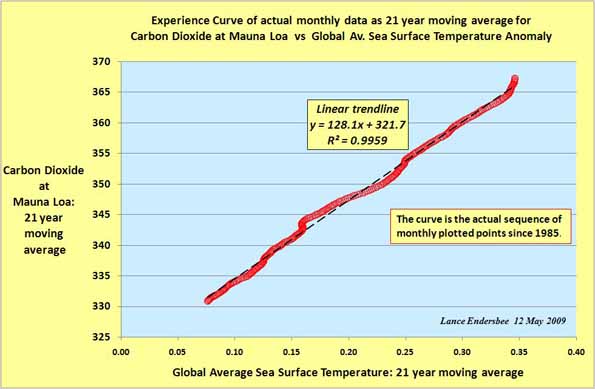 Climate skeptics are arguing with a straw man

A New Law Of Climate Change