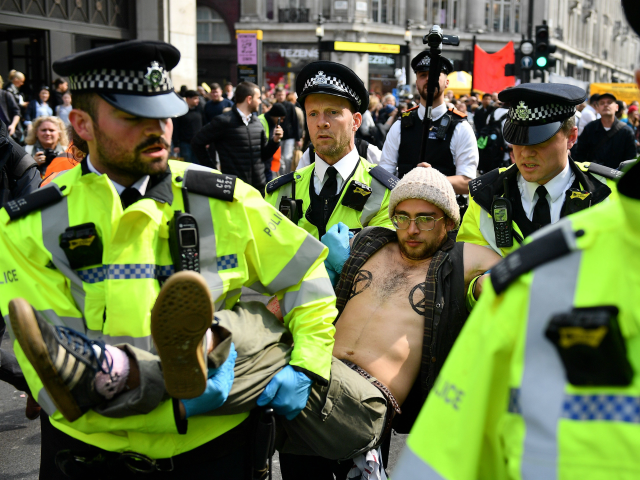 The chairman of the Police Federation has said that officers are too frightened to arrest Extinction Rebellion vandals for fear of facing lawsuits, the remarks coming after widespread criticism of law enforcement allowing eco-extremists to rip up turf in London and Cambridge, at times as police officers looked on.

One recent instance of criminal damage occurred when Extinction Rebellion (XR) activists ripped up turf outside of the Home Office in London and later did the same to the ancient lawn at Trinity College, Cambridge, as well as putting up roadblocks in the university city.

There was public protestation over not only the hypocrisy of environmental activists damaging the environment, but the police’s inaction. In the Home Office incident, footage shows at least two officers standing by as eco-extremists rip up large strips of grass and hurl them to the pavement.

Chairman of the Police Federation, which represents the concerns of rank-and-file officers, John Apter said that members across the country had expressed concern that if they attempted to arrest the protesters that they would be sued and face financial penalties.

The concerns arose after the High Court ruled against the Metropolitan Police force’s order banning the crippling XR protests in London, with green advocates claiming that they could sue the force for retroactive wrongful arrests.

“We’re damned whatever we do,” Mr Apter said in comments reported by The Times.

The Police Federation chief said officers were “clearly very mindful of potential legal action. The government has promised we will get the support that we need [but] it’s going to be on the minds of senior officers who will not want to fall on the wrong side of a previous judgment.”

Writing on the Cambridge XR protests, Breitbart London’s James Delingpole warned that “the wider and more important issue here surely is that Britain’s energy, environmental – and now, policing – policies have been devolved to the eco-fascist extreme.

“Extinction Rebellion is a ‘destabilising and extremist’ organisation; its objective is ‘system change’, which means bringing down Britain’s existing democratic system. If achieved, this would cause ‘rapid economic disaster’,” Delingpole wrote, citing a Policy Exchange report Extremism Rebellion: A Review of Ideology and Tactics published in July 2019.

It added: “The ‘civil resistance model’ they espouse is intended to achieve mass protest accompanied by law-breaking — leading eventually to the breakdown of democracy and the state. Obscured from public view, these objectives mark Extinction Rebellion’s campaign out as an extremist one that seeks to break down the established civil order and liberal democracy in the UK.”

Despite warnings of the motives and consequences of leaving this activism unchallenged, lobbyists pressured authorities to condemn forces such as Police Scotland, the South East of England’s anti-terror unit, and the City of London police when left-progressive, pro-XR newspaper The Guardian revealed that they had listed Extinction Rebellion in their counter-terrorism and counter-extremism documents.

The Policy Exchange report, however, highlights the level of extreme “apocalyptic predictions” of its leadership and the climate it inspires amongst its followers. Co-founder Roger Hallam — who late last year downplayed the Holocaust as “just another fuckery in human history” — had told the audience of an Amnesty International event in February 2019:

“We are not just sending out emails and asking for donations. We are going to force the governments to act, and if they don’t, we’ll bring them down and create a democracy fit for purpose.

“And yes — some may die in the process.

“Some of us have passed through the dark night to the soul and are ready, or at least we are no longer fearful of our fear.”

Delingpole: Why Is Boris Johnson Allowing Eco-Fascists to Run Riot in Britain? https://t.co/x1Z6QZ7Qod