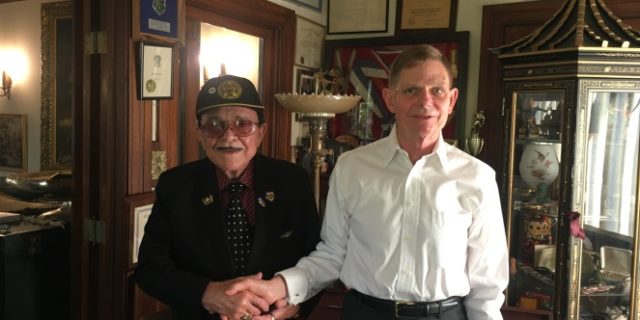 Dr. George Chilingar is truly the Renaissance man of the petroleum and gas industry. As professor emeritus of the University of Southern California, he has over sixty years of research and teaching behind him. In the 1960s, Dr. Chilingar developed the first practical natural gas plunger lift method of deliquifying a natural gas well based on his use of an à la-adiabatic process. His invention had an extremely low energy cost as well as low environmental impact, and is in use today throughout the world.

In the late 1970s, Dr. Chilingar began research with M. L.Surguchev, O. L. Kuznetsov, and E.M. Simkin in Russia after it was noted that oil rate production increased noticeably several days after the occurrence of an earthquake when the epicenter of the earthquake was located in the vicinity of the oil producing field. This increase in oil flow remained higher for a considerable period of time. This lead to a decade long study in the Russia which gradually focused on the use of acoustic vibrational energy or vibro-energy for enhanced oil recovery after reservoirs water flood. In 1996 Chilingar, Kouznetsov, Simikin, and S.A. Katz wrote a well-received paper titled “Improved oil recovery by application of vibro-energy to water flooded sandstones,” published in 1998.

The key takeaway of the 1998 paper based on studies at the Abuzy oilfield in Russia and Changirtash oilfield in Kirigzstan was that the rate of oil displacement increases and the percentage of residual oil decreases if vibro-energy is applied to the porous medium containing oil. Furthermore the rate of degassing increased due to the applied vibro-energy. Thus, the vibro-energy methodology was proposed to serve as an additional tool for increasing oil recovery; possibly in conjunction with Electrically Enhanced Oil Recovery (EEOR) techniques as well as chemical floods and other related processes.

Over the course of the next decade the team worked closely designing and conducting lab experiments and numerous oil field studies on various vibrio seismic methodologies.

In 2001 Dr. Chilingar, E. M. Simkin and O. L. Kuznetsov released their findings in a book published in Russian titled “The Physical Basis of Vibrational and Acoustic Influences upon the Oil-Gas Strata.”

The 2001 book outlined the physical foundations of vibration and acoustic impact on the reservoir to enhance oil recovery and increase the rate of development of depleted and waterlogged oil fields. It is shown that the area of ​​the most effective application of these impacts are fields with low and medium viscosity oils and difficult development conditions, which are characterized by high water cut and heterogeneity of formations, low permeability, high clay content, etc. The developed technologies are environmentally friendly and do not cause damage to well structure elements. The vibro-seismic technology including the electronics and acoustic transducer assemblies is comparatively inexpensive given the significant rate of return as manifest by long term increased flow activity.

This became a popular book in Russia for students, researchers, engineering personnel, and operators involved in geophysics and the development of oil and gas fields.”

Now Dr. Chilingar is in the process of rewriting this important book in English. The new book will incorporate the results of the vibro-seismic methodology in use in Russia. Dr. Chilingar’s aim is to popularize this oil recovery methodology as an environmentally friendly alternative to “fracking” in the United States.

Dr. Chilingar is the author of 73 books and over 500 scientific papers.

He is Professor Emeritus of Petroleum, Civil and Environmental Engineering at the University of Southern California (USC), Los Angeles, California. He received his Bachelor’s and Master’s Degrees in Petroleum Engineering at the University of Southern California (USC) in 1949 and 1950, respectively. While he was working on his Ph.D. in Geology at USC, he spent four years in the U.S. Air Force, where he made a scientific breakthrough in jet fuel and was given the position of Chief of the Petroleum and Chemicals Laboratory at Wright Patterson Air Force Base, Ohio. By 1956 he was awarded a Ph.D. in Geology with a minor in Petroleum Engineering. After his term serving in the USA Air Force, he returned to USC as a member of the School of Engineering faculty. For over 60 years, Professor Chilingar taught various courses in Petroleum Engineering, Petroleum Geology, and Environmental Engineering at USC. In 2008, he was honored with the Lifetime Achievement Award from USC.

As one of the most well-known petroleum geologists in the world and the founder of two prestigious journals in the oil and gas industry, he served as an advisor to many governmental organizations, dignitaries, and lawmakers. For example, he served as Senior Adviser of Petroleum Engineering to the United Nations from 1967 to 1969 and then again from 1978 to 1987. One of his greatest contributions to the petroleum industry is the method of identification of the oil-rich rocks by analyzing the ratio of calcium to magnesium contents in carbonate rocks (dolomitization). Through the use of this method, he discovered a large oilfield in Iran, which was named after him.

The results of his investigations are presented in over 500 research articles and 73 books in the fields of Petroleum and Environmental Engineering and Petroleum Geology. Many of his books have been written in or translated to Russian, Chinese and Farsi. He has numerous patents in the field of his inventions; namely EEOR and Acoustic Vibrational Enhanced Oil Recovery. Professor Chilingar is recipient of over 100 medals, awards, and diplomas from various governments, universities and organizations, including the Lomonosov medal of the Russian Academy of Sciences, Order of Homayun Gold Medal from the Shah of Iran, and the White Elephant Medal from King of Thailand.

In his research of the past 15 years, Professor Chilingar (together with O. Sorokhtin and L. Khilyuk) have been investigating the so called greenhouse effect in the Earth’s atmosphere and the impact of anthropogenic carbon dioxide emission on global climate evolution. He has shown that the effect of anthropogenic carbon dioxide emission is negligible (if any) in comparison with the global forces of nature. He proved that an increase in CO2 concentration in the atmosphere results in cooling rather than warming based on the Earth’s natural à la-adiabatic processes and related synoptic activities.

When asked about Dr. Chilingar’s life long field of study and service he said:

“Energy is the life blood of human society. Transportation, basic human comforts, and food production are dependent on fossil fuels. Except for hydroelectric power, renewable and green energy schemes are nothing more than political pipe dreams. The world depends on gas and oil. Early in my carrier I discovered how a near adiabatic (a al-adiabatic) process could be used to lift oil from wells. Later in my carrier, this led me to investigate the Earth’s own natural a al-adiabatic processes which categorically prevents any so called man-produced global warming or climate change from burning fossil fuels. The demonization of the petroleum industry must stop and I hope my research paves the way.”

Dr. Chilingar has written several papers proving scientifically that atmospheric CO2 does not contribute to increased temperatures on the Earth and he is the principal author of the epic book “The Evolution of The Earth’s Climate” as dedicated to President Donald J. Trump and other wise elected leaders. “The Evolution of the Earth’s Climate” is published by Wiley & Sons and available on Amazon dot com.

For information concerning commercial and research opportunities for the acoustic seismic methodology as a less expensive environmentally friendly alternative to fracking, contact the author, Tom Tamarkin.