Michael Mann’s defeat in the Supreme Court of British Columbia in the ‘science trial of the century’ may be about to have criminal repercussions south of the border in the United States.

Critics are again recalling the parallels with that other infamous crime committed at Penn State University – the Jerry Sandusky child sex abuse case.

The Big Football and Hockey Connection

Remember Rand Simberg? He and Mark Steyn are being sued by Mann for making that exact comparison – the unlawful university whitewash of two star ‘players.’

Steyn wrote of the similarities in cover up crimes committed by Penn State for Mann, when implicated for data fraud in the email leak during Climategate:

“Graham Spanier, the Penn State president forced to resign over Sandusky, was the same cove who investigated Mann. And, as with Sandusky and Paterno, the college declined to find one of its star names guilty of any wrongdoing.”

That case bore the same hallmarks of the Mann exoneration – a conspiracy among senior university personnel to commit a cover up crime. And as many lawyers will tell you, the cover up crime often brings a more damming and far-reaching outcome than the original offense.

Since last week’s ruling in the BC Supreme Court, interested third parties have made approaches to Dr Ball to work together to use this game-changing legal ruling to press for both a federal and state criminal investigation of Mann and his fellow conspirators.

My colleagues and I are henceforth calling it like it is: Michael Mann is a criminal fraud who burnt millions of dollars and his reputation to keep his hokey data hidden.

It is the view of Dr Ball and many informed analysts that we have so far merely touched the tip of the corruption iceberg by exposing fraudster Mann. No longer should anyone fear another lawsuit from him.

Like most doomsaying climate ‘researchers’ Mann had to rely on secret science to scare policymakers and citizens into believing man-made global warming is real.

Almost all the ‘science’ supporting the alarmist case is premised on computer models. As Dr Ball rightly adduced – such models are founded on GIGO – ‘garbage in, garbage out.’

Most climate science is pseudo science because of it. Little, if any peer review is performed and what is, takes place behind closed doors.

To expose Mann we had to prove his secret science  – those numbers in the math working out for his hockey stick  graph – were intentionally faked. The Wegman Committee, Ken Cuccinelli and others have tried and failed to shine the light of day on those hidden numbers.

For all their yeoman’s work the best they could possibly prove was that Mann was incompetent.

The gift the arrogant Michael Mann gave skeptics was his arrogance and naivety in legal matters.  His filing of that absurd libel suit against Dr Ball for comically stating that Mann belonged in  “the state penn, not Penn State” was priceless.

Those words will go down in the annals of history as they will be seen as the key that unlocked the door into the sordid conspiracy of the trillion dollar climate change Ponzi scheme.

The plaintiff lost the Mann-v-Ball case because, as we expected, he refused to show his secret science in court.

Anyone familiar with the legal system will know there are strict rules about the discovery of evidence and the penalties for hiding/destroying evidence.

Hiding or destroying key evidence is a desperate villain’s tactic addressed every day by judges, lawyers and juries in our courts.

Guilty litigants in both civil and criminal cases routinely hide, destroy or tamper with evidence in an attempt to cover up their wrongdoing. In law the ‘cover up crime’ is far worse that the original misdeed because it is a doubling down on wrong doing.

Mann lost as a consequence of a bad faith breach of the binding Undertaking he entered into in 2017 to release the disputed secret science – his graph’s unseen R2 regression numbers.

Mann’s refusal to release his data is no different from any fraudster hiding/destroying evidence.

The Mann-v-Ball case pivoted on the issue of the withheld R2 regression numbers (Mann’s math working out) which he unlawfully withheld.

It was unlawfully withheld because Mann and his hot shot lawyer, Roger McConchie, did not release it after 21 days when they had signed a legal undertaking to do so as part of the “concessions” deal between the parties agreed in 2017.

Mann believed he had hoodwinked Ball. He was wrong.

What is so laughable is Mann’s post defeat Tweet where he states he will probably appeal (he won’t).

His chances of success are wafer thin to none, particularly as he hasn’t changed one iota about releasing his secret data.

Mr McConchie will tell his dullard client that even if he prevailed in any appeal to resume proceedings, the likely outcome for persisting in keeping hidden his hokey data would be a ‘negative (adverse) inference’ jury instruction (upon the application of Ball’s lawyers).

The inescapable reality is that in both the civil and criminal courts, any litigant who willfully conceals key evidence is headed for defeat.

God help Mann if this were a criminal trial, for in those circumstances the jury could be instructed to regard him as guilty because the only reasonable explanation for hiding his evidence is to evade conviction i.e. by the perpetration of a ‘cover up crime.’

In a criminal case a defendant destroying/concealing evidence is liable to the same penalties as if it had been proven he/she committed the original offense in question.

Take, for example, the defendant on a murder charge who is proven to have deliberately destroyed/hidden the evidence which would have proven who  actually committed the murder. That defendant may still be convicted of murder because the crime of hiding/destroying the evidence proves a ‘consciousness of guilt.’

Every day in the civil and criminal courts these ‘cover up’ crimes are the trigger for finding an offender guilty because the law presumes an innocent man/woman would never knowingly conceal/destroy evidence that would prove them innocent.

Just think of it as simply a legal extension of common sense – you know, when someone hides/destroys evidence reason tells us they were up to no good.

So What Now for Mann’s discredited Hockey Stick Graph?

The fact Mann chose to forfeit a multi-million dollar lawsuit he instigated and invite worldwide ridicule for refusing to show his math ‘working out’ is prima facie evidence that his seemingly irrational actions are, most probably, indicative of a cover up crime.

We appear to have probable cause, ladies and gentlemen, for a RICO investigation. Someone please tell President Trump.

Dr Ball is currently considering proposals to work with well placed third parties in the U.S. who are willing to assist in launching a major public campaign for a full RICO investigation into Mann’s hockey stick fraud.

President Trump should bring the excellent Ken Cuccinelli back on the case. He will see similarities to the criminal conspiracy cover up crime by Penn State over the Jerry Sandusky child sex offenses which Penn State and other accomplices were found guilty. 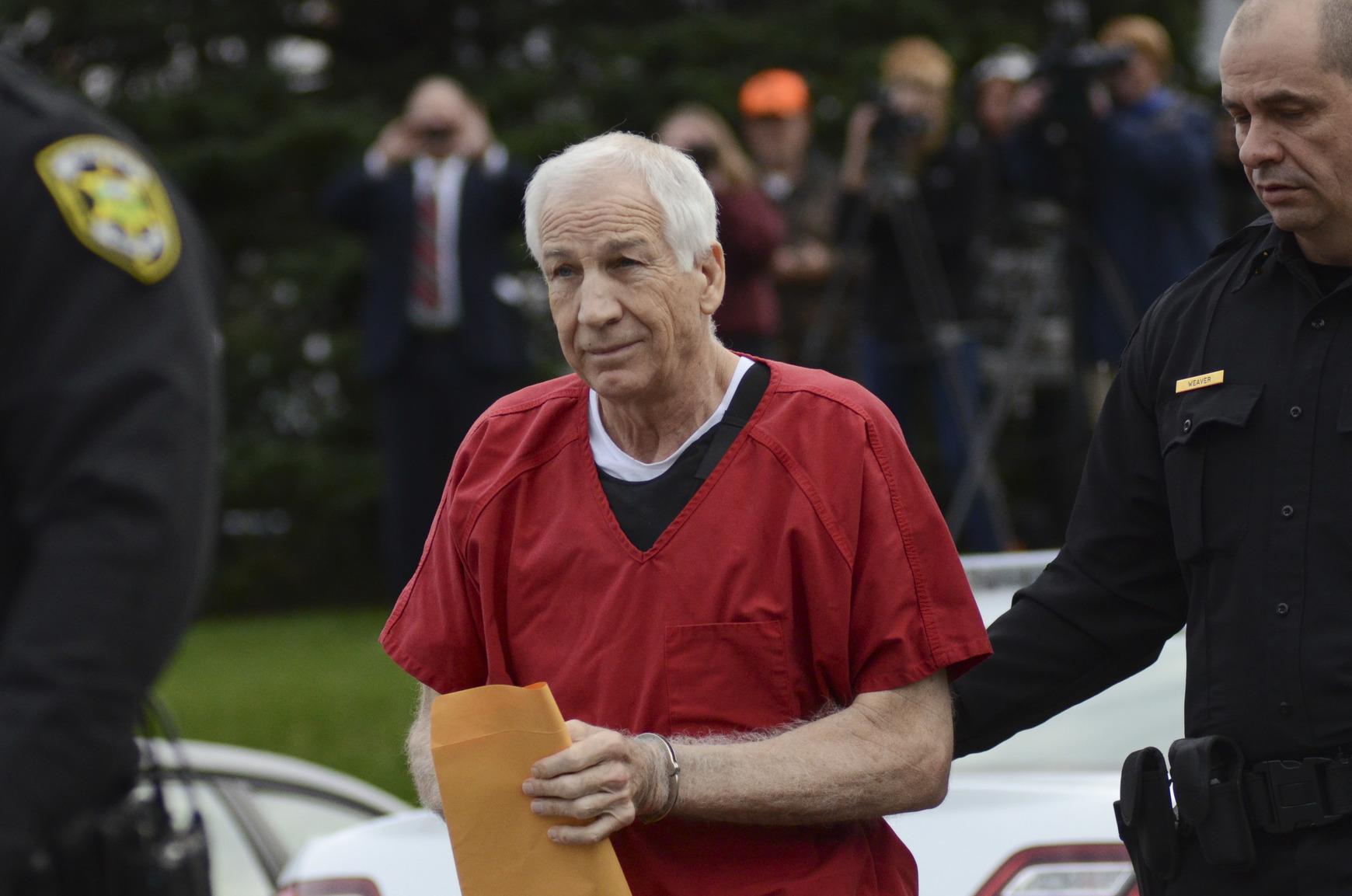 An honest prosecutor could show there exists a criminal conspiracy involving Penn State Uni, the NAS, UN IPCC and other discredited authorities.

Disgraced former Penn State hero Sandusky now rots in jail. The University was hit with a fine for $60 million plus another fine of $2.4 million for violating the Clery Act, a law that requires universities to report crime on campuses. It’s the largest fine in the history of the act.

Mann’s records may soon be liable to be subpoenaed and he cannot refuse to hand over his hidden data. If he refuses they will be seized anyway.

And readers, please keep in mind, such has been the stature of Dr Mann that there are hundreds of science papers which defer to Mann’s hockey stick graph findings of “unprecedented” modern temperatures.

In the hokey world of government climate science, where everyone is paid to sing to the same tune, the claim of “97 percent” agreement on climate alarmism is merely the outcome of monolothic groupthink.

Mann’s goose is well and truly cooked. You can bet more than a few disgruntled colleagues will ask for a plea deal (the fake ‘Nobel Prize winner’ is deeply disliked among his peers).

In short, the whole global warming cabal is now a train wreck in slow motion, headed for the ultimate reckoning for the biggest white collar crime in history. When that happens we can fairly claim the climate fraud is well and truly busted.