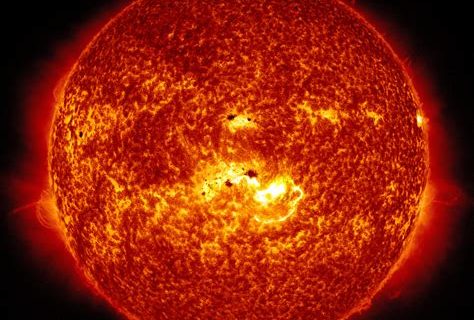 This technical note examines the linkage between measured surface temperature and calculated solar electromagnetic radiation (EMR) available to the top of the atmosphere (ToA) that changes due to variation in Earth’s orbit.

For each region, the monthly measured time based data for temperature and calculated Solar EMR is displayed as well as correlations between the two.  There are also time shifted correlations that indicate the thermal response of each region.  The responses to solar forcing vary significantly but the correlations outside the tropics are high:

The December Solar EMR at 60S peaked 3,800 years ago.  It has been in decline since then.  Figure 2 shows the monthly average temperature for both solar EMR and surface temperature for 55S to 65S for all longitudes.

Figure 3 examines the correlation between temperature and EMR.

There is a relatively weak positive correlation but there is indication of a phase shift.

The linear correlation has a regression coefficient of 96%.  A change of 28.5W/m^2 is required to shift the surface temperature 1C.

Given the good correlations over ocean surfaces, it was considered educational to look at a region of land surface that has good coverage of reliable temperature records.  Figures 8, 9 and 10 show the result.

The month-to-month correlation for the land surface is much better than for the ocean but there is an obvious loop.  The best correlation is achieved with just 1 month lag.

The correlation of 97% for land is better than for ocean despite the much wider annual range in temperature for the same range in solar EMR; requiring only 13.5W/m^2 to move the surface temperature 1C.

The temperature response to EMR in the Nino34 region shown in Figure 11 is quite different to the higher latitudes so far considered.

It is clear that there is some annual cycling, but it is obviously poorly correlated with the EMR variation as shown in Figure 12.

The regression coefficient of 14% indicates high confidence the correlation is negative.  The fact that temperature leads EMR is consistent with negative feedback based on the surface temperature rather than the temperature actually controlling the sun.

The temperature trend in the region displays a definite longer-term beat, which shows up in the frequency analysis in Figure 14.

The annual peak is dominant but there are other broad peaks around 10.7 years and 22.3 years using just the temperature from the satellite era.

Figure 15 shows the frequency analysis for the calculated solar EMR based solely on the orbital geometry.

It is clear that there is no matching peak at a period around 11 years so it is concluded that the beat in the temperature record is not related to orbital changes.

Figure 16 shows the time variation of the temperature with monthly sunspot number.

There may be some correlation, but it is not clear in this graph. And the frequency analysis of the sunspot number shows peaks at periods similar to the temperature measurement.

It has been demonstrated that land and ocean surface temperature are highly correlated to solar EMR in mid and higher latitudes; making due allowance for different thermal inertia of land and ocean.

It is further noted the observed trends in reliable surface temperature records can be forecast by the changing regional monthly solar EMR.  Figure 20 shows how solar EMR has changed over the past 520 years and will change in the next 80 years at 30N.

It has also been observed that land surface temperature responds in half the time and twice the range of latitudinal constrained deep water bodies such as the Mediterranean Sea for the same EMR variation.  So it should be expected, as the solar EMR increases in the Northern Hemisphere, while reducing in the Southern hemisphere, the global average surface temperature will increase due to the higher proportion of land to water in the NH compared with the SH.

The average solar intensity over the Southern Ocean is in steady decline but the decline is most evident in November, which reduces the peak summer surface temperature.  Figure 21 shows how the solar EMR has changed during the satellite era from 1980 to 2022 and will continue to change to 2040.

The Nino34 region is in a temperature limited region where temperature is negatively correlated with solar EMR.  There is high probability that there are other solar factors in addition to orbital changes influencing the temperature in the region.

The data for GHCN land air temperature and NCEP measured SST were downloaded from the Climate Explorer website.

The orbital parameters for determining the changes in ToA solar EMR came from the Astropicxels site:

The data on sunspot number were sourced from the Royal Observatory of Belgium Sunspot Index and Long-term Solar Observations (SILSO) web site:

Although solar EMR was calculated from the orbital data, there is a useful reference source for determining insolation at nominated latitudes and months using the IMCCE insola web based model:

Richard Willoughby is a retired electrical engineer having worked in the Australian mining and mineral processing industry for 30 years with roles in large scale operations, corporate R&D and mine development.  A further ten years was spent in the global insurance industry as an engineering risk consultant where he developed an enduring interest in natural catastrophes and changing climate.