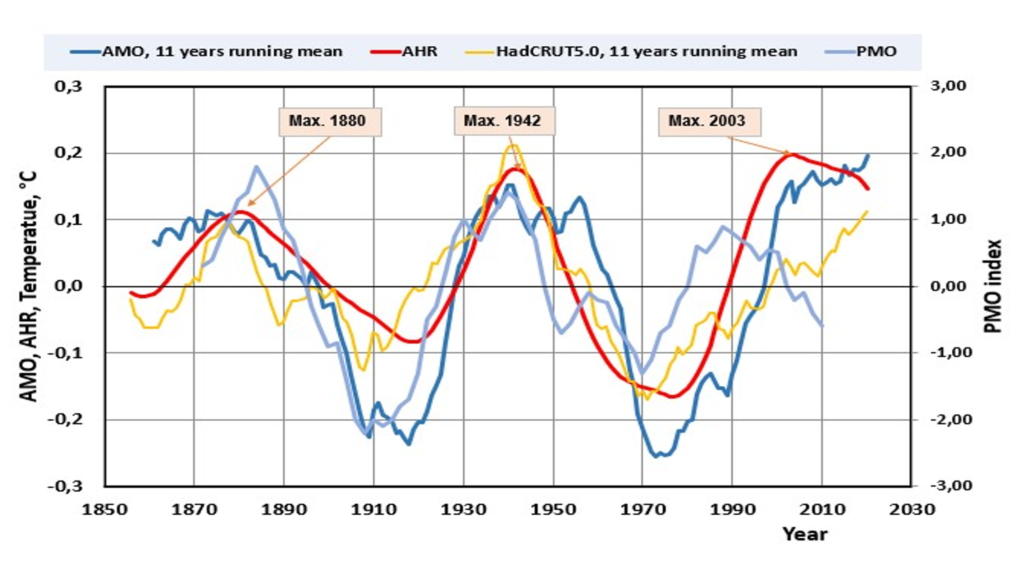 The oscillations are not limited only to temperatures. Researchers have studied oscillations of day lengths, magnetic field magnitudes, sunspot lengths, auroral records, cosmogenic isotopes like 14C and 10Be, Indian moons intensities, sediments of NE Pacific, 14C of tree-rings, and sea carbonates. The oscillations periods of these studies vary from 60 to 90 years. The most common and prominent periodicity has been 88 years. It has been called according to Gleissberg, who found in 1958 that the solar cycles weaken and strengthen over the period of about 80 years. The sun has been suggested to be the origin of 88-year oscillation since this period can be connected to the repetitive occurrence of the basic Schwabe cycle of 11 years. This solar cycle length varies typically from 10 to 14 years, which explains why the Gleissberg cycle length varies around 88 years.

The other main periodicity of the research studies is around 60 years. The researchers normally suggest no origin for this periodicity. Ermakov, Scafetta, and Ollila have analyzed that the orbital periods of Jupiter and Saturn can create temperature variations of 60 years by moving the solar system barycenter, which causes variations in the cosmic dust amount entering the atmosphere. The temperature effect happens through cloudiness variations.

The authors have studied how well the variations of astronomical harmonic resonances (AHR) could explain the 60-year temperature variations, which are based on instrumental records and on the tree-ring data of the supra-long Scots pine tree-ring record for northern Finnish Lapland (subsequently called the Finnish timberline pine chronology (FTPC)), stretching to the year 5634 BC.

The strong feature of the FTPC tree-sing signal is the one-year accuracy of tree-ring method and therefore it is the most effective form of proxy information on the past climate. The radial growth of (tree-ring width) is regulated by the average summer temperature in cool areas and precipitation in arid areas. The minimum factor for pine growth in Lapland (the northern part of Finland) is temperature. The FTPC tree-rings series is the longest one tree-type series in the world. The explanation is that so-called pine subfossils once sank into the oxygen-free swamps and the bottom mud of lakes for millennia.-

The FFT (Fast Fourier Transform) analysis was carried for finding out the main periods for the FTPC signal, the AHR signal, and the Ljungqvist temperature proxy data, Fig. 2. 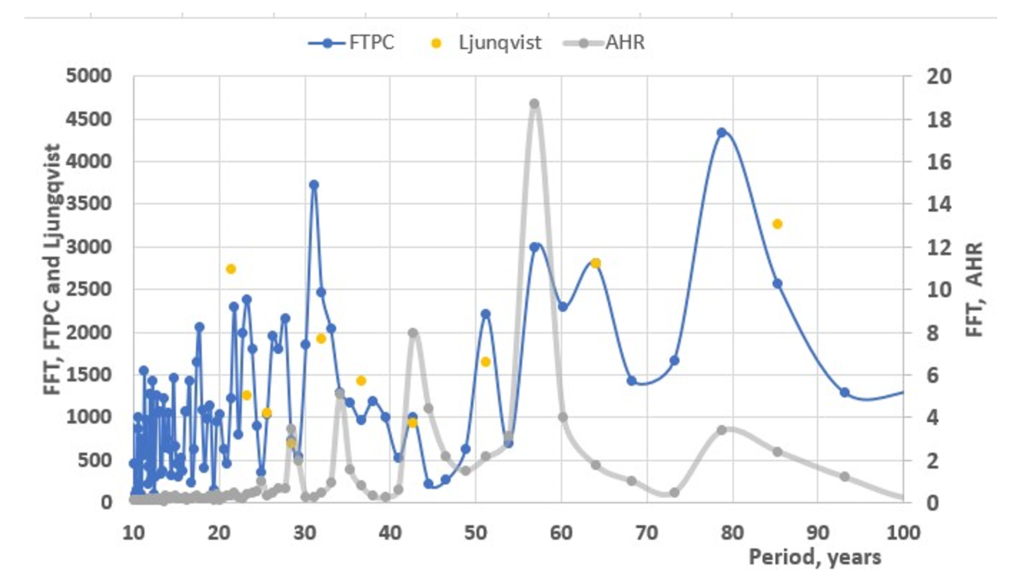 These analyses show that the well-known Gleissberg cycle of 80-90 years is the dominating cycle caused by the Suns’ activity changes but the observed 60-year cycle can be connected to the dominant frequency of the AHR signal.

The authors have combined the AHR signal and the Gleissberg-signal. These signals had a common maximum in 1941 which explains the warm period of the 1930s. These two oscillations may be also in opposite phases or close maximum or minimum phases. In Fig. 3 the combined signal of 60- & the 88-year signal is the blue break line curve and the red curve is the FTPC signal. 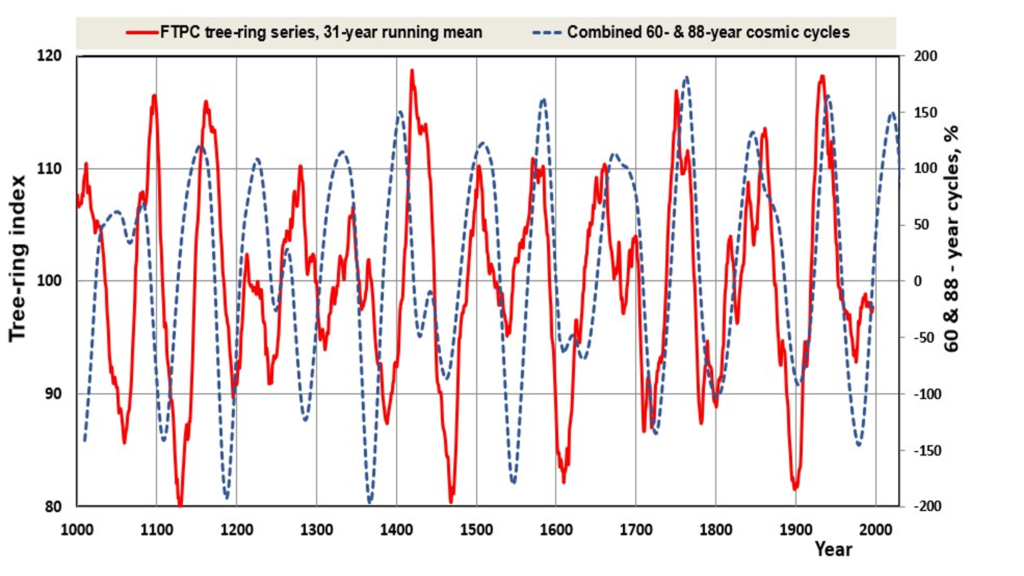 It is easy to see by the naked eye that the ups and downs of these two trends happen close to each other. The FTPC curve is spikier and the authors have identified that the identified volcanic eruptions are the main causes of these deviations.

The original study has been published by Wiley Online Library (The Royal Meteorological Society) and it contains more detailed analyses and figures: https://doi.org/10.1002/joc.7912