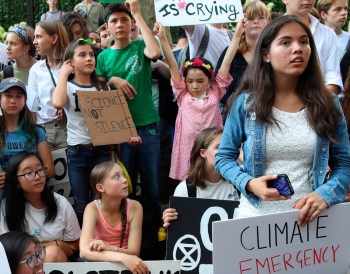 CCD Editor’s Note: The following is a second excerpted chapter from Lynne Balzer’s new book, The Green New Deal and Climate Change: What You Need to Know, available from Amazon in paperback and Kindle. You can read her previous chapter here.

For approximately forty years the AGW establishment has been indoctrinating the public worldwide, and their media accomplices have been only too willing to cooperate.

But nowhere is this more evident than in our public schools.

Just as the Nazi’s brainwashed the German children, the global warming movement, which hijacked environmentalism, has unfairly used their captive audiences in schools to influence their young minds.

On Friday, March 15, 2019, school children all over the world took the day off from school to participate in a demonstration to save the world from climate change.

The headmasters of schools in Britain suspended schools even though their students, were supposedly “on strike.” It was obvious that this affair, arranged to garner more media attention, was organized by the adults.

Al Gore expressed his highest praise for this action, saying:

“Today, hundreds of thousands of young people in over 120 countries stood up to fight for their future. Going on strike from school, they spoke with one voice and one message for the adults of the world: Act on climate. Now…I’ve been in this fight for many, many years and I don’t have words for the pride and joy I feel witnessing these brave young people speaking out today. If you were a young activist striking today, thank you.”

This sort of manipulation of young children’s minds takes advantage of the fact that children are impressionable and often lack the education and experience to discern truth from fiction.

The strategy of the organizers is reminiscent of that used by the Hitler Youth leaders in Nazi Germany.

One of the worst nightmarish examples of this type of manipulation is David Suzuki’s statement:

“The North Pole, once a wintery wonderland, is no longer safe for Santa’s Workshop. Climate change is melting the snow and ice, and the rising water is getting too close for comfort. Santa must relocate — fast — to make sure that all the nice boys and girls still have a Happy Holiday.”

We have a great responsibility to teach children as well as adults how to recognize the signs that they are being exploited.

Propaganda is a persuasive and widespread message designed to advance the interests and agenda of a particular group.

What sets it apart from other mass-communication techniques is that it bypasses logic by using faulty reasoning – logical fallacies – and emotional appeal.

Dr. Tim Ball has identified some telltale signs that indicate that something we read and hear is propaganda.

1. Weather events that are normal are presented as abnormal. This is because the climate change we’ve experienced in the last century is all within the parameters of natural climate change that is to be expected.

The history of such events plainly shows that, despite what the alarmists say, there has been no increase in droughts, floods, heatwaves, wildfires, hurricanes or tornadoes.

An example of this type of reporting is this headline: “The 2017 Hurricane Season Really Is More Intense Than Normal,” according to Maggie Astor of the New York Times. The key phrase here is “more intense than normal”.

2. Definitions are changed. Doing this is a logical fallacy known as equivocation. In 2004 climate alarmists, realizing that the warming had stopped, changed their alarm of “global warming” to “climate change”.

“This gave them a greater range and made the problem more threatening. Now you see headlines identifying that it was, variably the warmest, coldest, wettest, driest, calmest, and windiest,” says Dr. Ball.

3. They play on our emotions – such as fear, guilt, and pity – rather than on reason. They imply that we should feel guilty for what we are doing to our children and grandchildren. We should take pity on the poor polar bears.

A good example of this type of propaganda is the following editorial by Mark Hertsgaard:

“The horrors hurled at Houston… in late August were heartbreaking—but also infuriating. How many times must we see this disaster movie—titled Hurricane Harvey in 2017, Hurricane Sandy in 2012, and Hurricane Katrina in 2005, along with many lesser-known foreign releases—before we intervene and change the ending? And how long before we hold the ultimate authors of such climate catastrophes accountable for the miseries they inflict?

“The tragedy of Harvey starts with the suffering of innocents like Jordyn Grace, the 3-year-old who survived the flood by clinging to the body of her drowned mother, who had prayed with her last breaths. At least 60 people died in Texas because of the storm, over 1 million people were displaced, and who knows how many survived but lost everything?

“What makes this so infuriating is that it shouldn’t be happening…And how long before we hold the ultimate authors of such climate catastrophes accountable for the miseries they inflict?”

The rant goes on and on. To whip people into an emotional frenzy, he blames this storm on “climate denialism,” which itself is a misnomer. No skeptical scientist has ever denied that there is a climate or that the climate is changing.

Hertsgaard also makes the totally irrational and incorrect assumption that such hurricanes did not exist before man started putting carbon dioxide into the atmosphere.

Nothing could be further from the truth as detailed in chapter five of my book: eight of the ten worst hurricanes in US history occurred in the late 1800s and early 1900s when the level of carbon dioxide was much lower than today.

A category 4 storm, Harvey was the country’s first major — category 3 or higher – hurricane to make landfall on the US mainland since Hurricane Wilma hit Florida in 2005.

This ended a twelve-year period, the longest in US history, with no major landfalling hurricanes. Evidently, Hertsgaard either didn’t do his homework or tried to push lies onto the American people in a deliberate attempt to instigate fear and misdirected blame.

To add to the emotional and illogical tone of the conversation, propagandists do outlandish things like giving Mother Earth legal status with the right to sue corporations and “climate deniers”.

4. They take advantage of the public’s lack of scientific knowledge. Climate is a very complicated subject. Even some scientists who specialize in other disciplines, such as biology, may lack the confidence needed to make an informed decision.

So, they trust the “experts.” This enables the climate alarmists to make up fake terms such as “polar vortex” and unscientific statements, such as “The science is settled.” Real science is never settled.

5. They keep ramping up the threat to make it more and more ominous. The latest IPCC statement now warns that we have only twelve more years to do something about climate change.

This is just another of the many tipping points that never came to fruition. (See chapter 2 to learn how many past predictions have materialized.)

However, we can teach young people how to spot propaganda by allowing them to analyze articles about the subject and spot evidence of these tactics.

“You don’t seem to get it, that this is a fascist tactic. You are using innocent children for your own ends. And this is child abuse of a psychological nature. It’s normally called brainwashing, and you are guilty of participating in it. Mao would be proud…You are clearly projecting your own psychosis on the children. Self-loathing is a heavy burden. Why don’t you express it through adults rather than abusing innocents?”

Dr. Moore got it right.

[The book was finished before Greta Thunberg’s stratospheric rise as a climate alarmist superstar.]