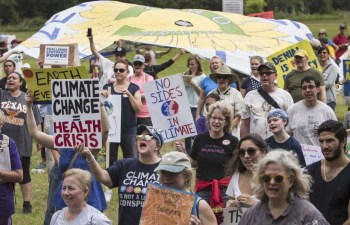 Sen. Bernie Sanders, on the presidential campaign trail, put out a video announcement of legislation he introduced with Reps. Alexandria Ocasio-Cortez and Earl Blumenauer declaring climate change as a national emergency — nay, as a global emergency.

And that raises the very respectable, rational question: Do these people really believe what they say?

Honestly. How could they? It’s beyond bizarre.

Ah yes, the old “do not understand” argument.

It’s perhaps the greatest and most well-played rhetorical device in the world — to argue “you’re either with me, or you’re too stupid to understand me.” It’s how the swindlers got the emperor to walk naked in the streets. It’s how Democrats almost always sell their science and peddle their preened-up, ginned-up environmental “facts.”

By pretending they’re smarter than the average bear.

“What the scientific community has told us is that we have all of 12 years in order to transform our energy system away from fossil fuel to energy efficiency and sustainable energy, or there will be repairable damage done to this planet,” Sanders said.

Sanders wants to “take on” the fossil fuel companies who “make billions and billions of dollars every single year destroying our planet.” And he wants your vote, and wallets, to do it.

A couple of dozen other members in Congress have signed on to this emergency declaration.

But on weather-tied emergencies, the history of predictions bearing truth is sketchy. At best.

And in between, there were scares of acid rain and ozone layers and canned hair spray and — lots and lots of money being made.

The Government Accountability Office reported that between 1993 and 2014, the level of federal funding for climate change research grew from $2.4 billion to $11.6 billion.

The same environmental movement that likes to pretend its entire mission is about the greater good of humanity is actually a big for-profit beast — and has been for years.

The Sierra Club, for example, pulled in more than $109 million in revenues in 2015. Greenpeace, that same year, reported revenues of almost $37 million.

The World Wildlife Fund reported total revenues and support for fiscal 2018 of nearly $336 million. And playing politics is just part of their business models.

Look, it’s not that environmentalism doesn’t have its place in proper society.

It’s just that the left has elevated environmentalism to the position of religion and taken their cult-like views of their big green gods to insane levels.

Now it’s incumbent on those with critical thinking skills to step in and put a stop to the madness. And that right there, curbing the insanity, is the real national emergency.