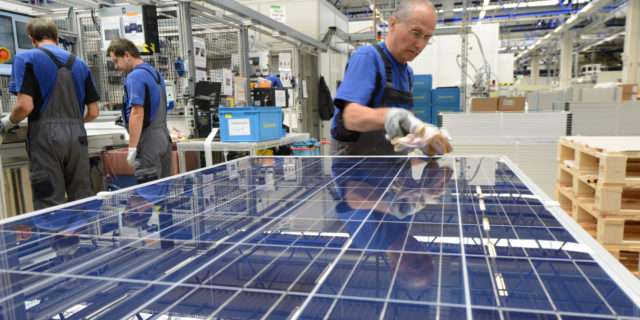 Not being a dope, you likely realized a long time ago that it was going to take a lot of energy to manufacture the components of the future green energy utopia. Wind turbines, solar panels, electric cars, and so forth — there is lots of steel, other metals, and silica involved that all need to be melted at high temperatures to get formed into the devices. How are they going to achieve that at reasonable cost using just the wind and sun as energy sources?

Up to now, the main strategy has been to buy most of the devices from China, where they are made largely using energy from coal. Out of sight, out of mind. But both Europe and the U.S. have made an effort to get at least somewhat into the game of making these things. Europe finds itself leading the acceleration into the green energy wall, with the intentional suppression of fossil fuel production and now the substantial cutoff of Russian gas supplies causing sharp spikes in the prices of both gas and electricity.

Without any low-priced fossil fuels to use for making the green energy devices, what is the current situation in Europe? A source called renews.biz has a roundup on October 4. Some excerpts:

Research from Rystad Energy reveals that 35GW of solar manufacturing and more than 2000 gigawatt hours of battery cell manufacturing capacity in the EU could be mothballed unless power prices return to normal. The energy intensive nature of these manufacturing processes is leading some operators to temporarily close or abandon production facilities as the cost of doing business escalates.

Who might have guessed that making solar panels and big grid-scale batteries might be “energy intensive”? There’s this specifically as to battery manufacturing:

Battery cell manufacturing – crucial in the EV and battery storage supply chain – is even more energy intensive than solar manufacturing, and Europe is a major global player. The EU currently boasts about 550GWh of capacity, representing 27% of global operational capacity. Announced projects under development are set to boost that total significantly, increasing capacity to 2.7 terawatt-hours, positioning the EU as a global leader. However, those are now at risk and the car manufacturing and battery storage sectors could struggle to source Europe-made batteries as a result, stated Rystad. “High power prices not only pose a significant threat to European decarbonisation efforts but could also result in increased reliance on overseas manufacturing, something governments are eager to avoid.

Looks like it takes lots of carbon to achieve “decarbonization.”

Meanwhile, over at the Guardian on September 12, they have begun to fret that high electricity prices are threatening the whole idea of electric cars. The headline is “Soaring energy costs could threaten future of electric cars, experts warn.” Excerpt:

Electric car owners, whether charging their cars at home or through contracts with charging operators, have seen price rises of 10% or more. Further price rises are expected, owing to the fact that the price of electricity is linked to that of gas, which has become ever scarcer since Russia turned off its gas supplies to Germany almost two weeks ago. Allego, one of Germany’s largest charging station operators, raised its prices at the start of this month from 43 cents a kilowatt hour to 47 cents. Express charging, via a continuous current, has risen from 65 to 70 cents a kilowatt hour while the fastest, so-called ultra-fast charging, has gone up from 68 cents to 75 cents a kilowatt hour.

According to the automobile economist Stefan Bratzel, the development is an immediate threat to the industry. . . . “If electric cars become more expensive to use, the surge in electric mobility is in danger of collapsing. . . .

And then we have the story of Britishvolt, the UK’s first “gigafactory,” supposedly on the road to making big batteries to backup the renewable energy future. They even have substantial backing from the UK government, but apparently it’s not enough. With European energy prices spiking, investors are heading for the exits; and the Times (London) reports on October 15 that now they are “running out of money” and need an infusion of some 200 million pounds by year end to avoid going bust:

The company building Britain’s first battery “gigafactory” is in emergency talks with investors including a major carmaker amid fears it could run out of money before the end of the year. Britishvolt, a government-backed developer of battery cell technologies, is reportedly holding talks with seven potential investors after recent market turmoil led to prospective backers pulling out of its latest funding round.

I’m willing to place a bet right now that it will never be possible to build all the green energy devices to power the world using only green energy. Does anybody want to take the other side?