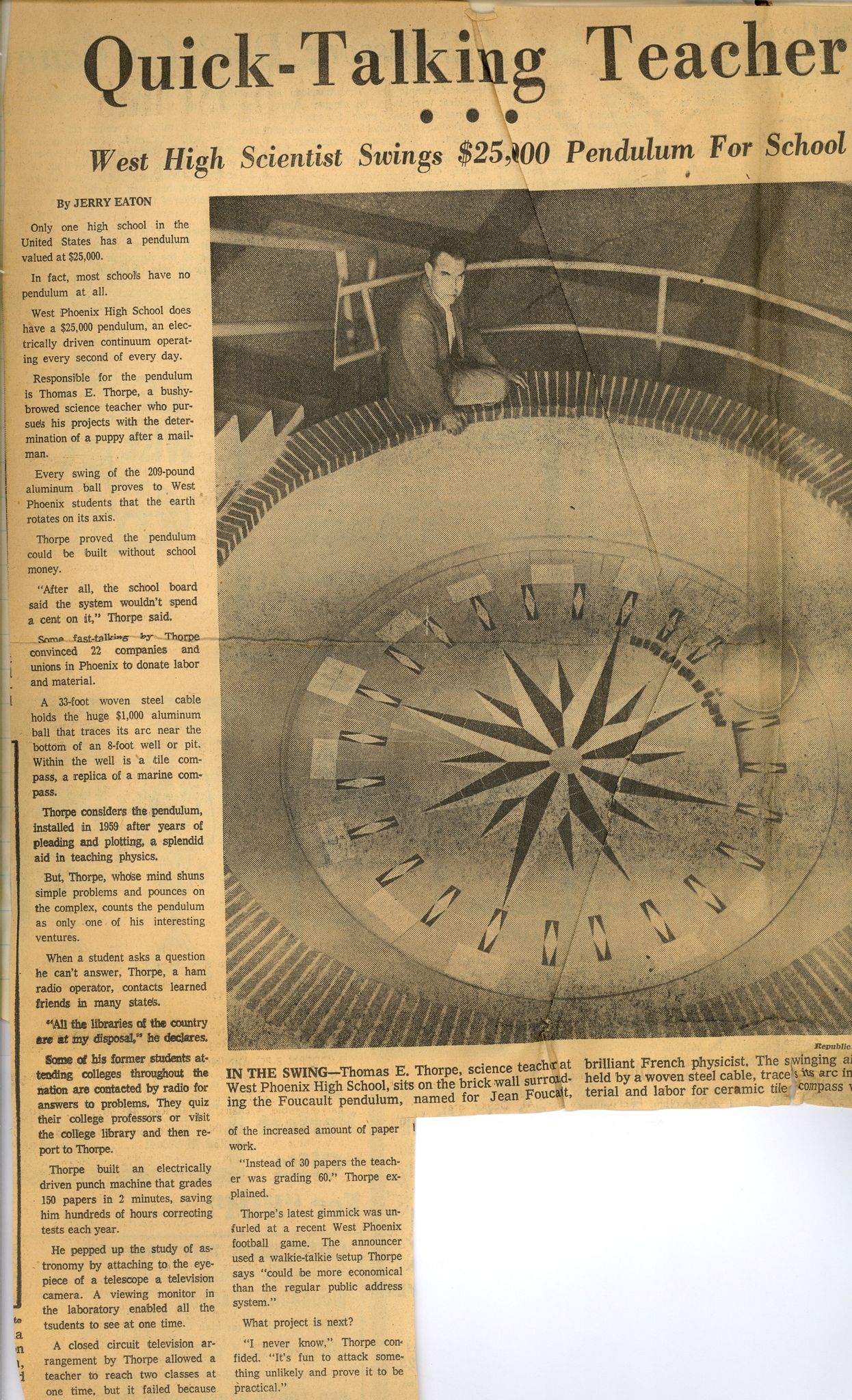 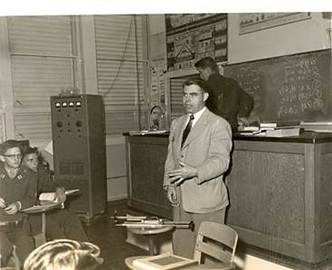 This a picture of Dr. Tom Thorpe, W7KYN, teaching ham radio at West Phoenix High School in 1952.  In the background is the monster 1 KW+ AM transmitter students made for working 10-40 meters.  The young man with the glasses sitting to the left of the ham rig is Jerry Wheeler.  Mr. Wheeler developed a product called Quick Code for the Amateur Radio market which he still sells today.  Quick Code

Dr. Thomas Edward Thorpe, a former Northern Arizona University (NAU) faculty member, died Feb.9, 1991 at his home in Prescott, Arizona. He was 70. A military burial with full honors was conducted Feb. 19, at Mountainview Cemetery, Prescott, AZ. Dr. Thorpe was born in Mayer, AZ, July 20, 1920. His maternal grandfather was the legendary founder of Mayer AZ, Joseph Mayer, and his paternal grandfather was Sir Thomas Edward Thorpe of the United Kingdom. Dr. Thorpe received three degrees from Arizona State University and served for 17 years as the chairman of the science department at West Phoenix High School, Phoenix, Arizona. In 1961 Dr. Thorpe was recruited by Dr. Fletcher G. Watson of Harvard Un9iversity as the founding member of the Harvard Project Physics (HPP) teacher’s team.  Dr. Thorpe was responsible for many of the HPP innovations such as the moving “blinkies”  used in time lapse motion demonstrations as well as the hardware to demonstrate the experimental findings of James Chadwick leading to the discovery of the neutron and Browning motion demonstration devices using micro sized particles. In 1968 he joined the physics faculty of NAU. He retired as full Professor of Physics in 1974. During World War II, Dr. Thorpe was a lieutenant colonel in the U.S. Army Air Force and was head of B-17 navigation and bombardiering instruction at Kirtland Field, Albuquerque, NM. He is survived by a son, Tomer Tamarkin (né Thorpe); a brother Wilbur, (1921-2006,) a grandson, Jeremy A. Tamarkin, and two step-grandchildren.