On July 4, 2019, I published the article “THE COST TO SOCIETY OF RADICAL ENVIRONMENTALISM”.

There was a reason why this article was published on July 4. My article begins:

IT IS BECAUSE GLOBAL WARMING AND CLIMATE CHANGE ALARMISM WAS NEVER ABOUT THE SCIENCE – IT WAS ALWAYS A FALSE NARRATIVE, A SMOKESCREEN FOR THE TOTALITARIAN OBJECTIVES OF THE EXTREME LEFT.

Some people may think this was statement was inaccurate, or that I was being unfair. However, one week after my article was published, Democratic New York Representative Alexandria Ocasio-Cortez’s chief of staff, Saikat Chakrabarti, fully verified my statement. He said, as written in the article below:

“4. Humanity needs modern energy to survive – to grow and transport our food and provide shelter, warmth and ~everything we need to live. Wind and solar power are too intermittent and too diffuse to be practical or effective. Green energy schemes have been costly failures.

Fully ~85% of global primary energy is from fossil fuels – oil, coal and natural gas.The remaining ~15% is almost all nuclear and hydro. Green energy has increased from above 1% to less than 2%, despite many trillions of dollars in wasted subsidies. The 85% fossil fuels component is essentially unchanged in past decades, and is unlikely to significantly change in future decades.

The fatal flaw of grid-connected green energy is that it is not green and produces little useful (dispatchable) energy, primarily due to intermittency – the wind does not blow all the time, and the Sun shines only part of the day. Intermittent grid-connected green energy requires almost 100% backup (‘spinning reserve’) from conventional energy sources. Intermittent wind and solar electrical generation schemes typically do not even significantly reduce CO2 emissions – all they do is increase energy costs and reduce grid reliability.

Claims that grid-scale energy storage will solve the intermittency problem have proven false to date. The only proven grid-scale ‘super-battery’ is pumped storage, and suitable sites are rare – Alberta is bigger than many countries, and has no sites suitable for grid-scale pumped storage systems.”

In addition to green energy’s fatal flaw of intermittency, there is also the second fatal flaw of diffusivity. The land area of the wind farms required to provide 100% of Great Britain’s energy demand would comprise about 10% of the country’s total land area – it’s explained at 1:58 in this video:

In the USA, this 10% would total about 300,000 square miles, or all of Connecticut, Delaware, Indiana, Kentucky, Maine, Maryland, Massachusetts, New Hampshire, New Jersey, Ohio, South Carolina, Tennessee and Virginia, and more land and much more money would be required to provide back-up power for when the wind does not blow.

Then there is the incredible cost. According to the article below, “The Green New Deal in its entirety could cost up to $93 trillion over a decade.” That would more than quintuple (5x) the USA’s national debt – to solve an imaginary “global warming / climate crisis” that does not even exist in reality.

All over the world, countries that once had a future have fallen into dictatorship, poverty and misery. It is notable that of the ~167 large countries in the world, most are totalitarian states, and all but “the chosen few” citizens of these countries suffer under brutal leftist dictatorships.

Now the last great democracies, the hope of the world, are under attack by leftist extremists.

Radical greens have used wildly exaggerated scary stories of runaway global warming and climate change to stampede the gullible, in order to achieve their political objectives.

The absolute lunacy of the Green New Deal and its delusional acolytes is now clear – global warming alarmism and green energy nonsense was never about the climate – it was always a false narrative, a smokescreen for the totalitarian objectives of the extreme left. Once the left controls our energy supply, they control everything in our society – it will be “One Man, One Vote, Once!” – the end of freedom. 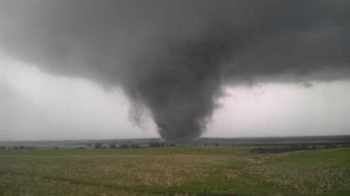