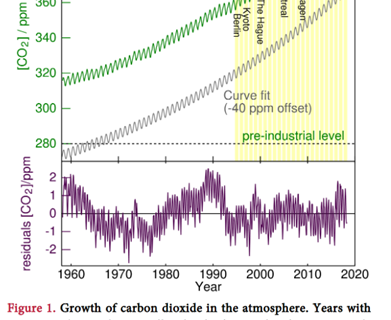 ABSTRACT
The dynamics of carbon dioxide in the atmosphere is analyzed and it is shown that the Pinatubo eruption in 1991 had a noticeable effect on these dynamics. The growth rate slowed down. Moreover, analyzing the year-on-year CO 2 growth data, we can see an anthropogenic footprint, possibly due to the burning of fossil fuels. On top of this anthropogenic contribution is a natural contribution that is of similar magnitude, and that closely follows the ocean surface temperature (influenced by ENSO, El Niño Southern Oscillation). This latter fact is consistent with the hypothesis of the correlation of global temperatures and carbon-dioxide in the atmosphere being governed by Henry’s Law, in which carbon dioxide variations are the result of, rather than the cause of, temperature changes. This latter being the so-called “greenhouse effect”, sometimes mentioned as responsible for (anthropogenic) climate changes, and that cannot explain the observed phenomena described here. Similar conclusions are drawn on monthly data of carbon dioxide and temperature as well.