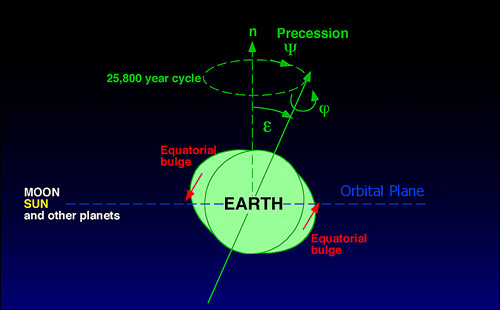 The war on hydro-carbon fuels will have no measurable effect on global temperatures. Nor will carbon taxes, carbon offsets or subsidies for wind turbines or solar panels. There are climate controllers far bigger than human CO2 at work.

No place on Earth lives in the mythical average global temperature. Earth’s temperature dances to cyclic rhythms every hour, every day, every month, every season, every year, and to every beat of the sun-spot and glacial cycles.

The daily cycle of Earth’s rotation causes continual changes in radiant energy received by and transmitted from every spot on Earth. It produces the cold at dawn and the afternoon warmth. 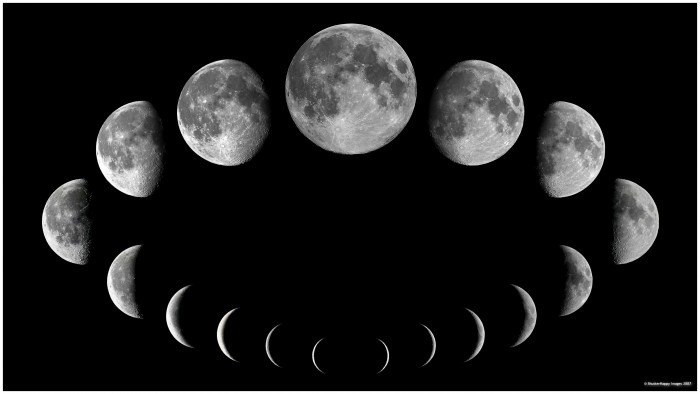 Superimposed on the daily solar cycle is the monthly lunar cycle, driven by the orbit of the Moon around the Earth. These two cycles interact to produce variations in atmospheric pressure, and tides and currents in the oceans and the atmosphere. These are the short-term weather makers.

The yearly seasonal cycle is caused as the tilted axis of Earth’s rotation affects the intensity of solar energy received by each hemisphere. This produces spring, summer, autumn and winter for every spot on Earth. As the Earth’s orbit cycles between more or less elliptical, seasonal extreme temperatures also vary. 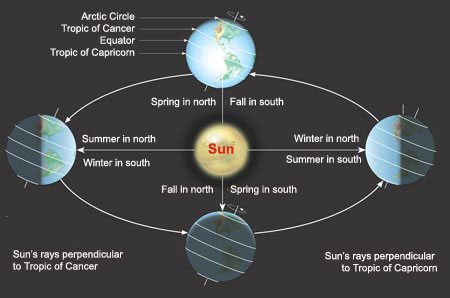 Then there is the 22 year sun-spot cycle, which correlates with cycles of floods and droughts. Sunspots are indicators of solar activity which cause periods of global warming and cooling.

Earth also generates the less predictable El Nino climate events that have a huge effect on the global patterns of weather and temperature.

The least recognised but most dangerous climate cycle is the glacial cycle. 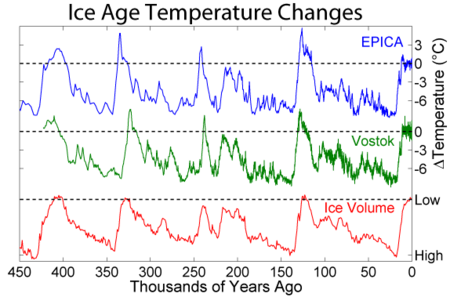 We live in the Holocene Epoch, the latest warm phase of the Pleistocene Ice Age. The climate history of the Holocene, and its predecessor the Eemian, are well documented in the ice core logs and other geological records. One cycle consists of a glacial age of about 80,000 years followed by a warmer age of about 20,000 years, with peak warming occurring over about 12,000 years. Our modern warm era commenced 12,000 years ago, so it is probably nearing its end.

There have been eight warm eras separated by long glacial winters over the last 800,000 years of the Pleistocene. In every beat of this cycle, the vast ice sheets melt, sea levels rise dramatically, coral reefs and coastal settlements are drowned, and forests and animals re-colonise the higher land released from the ice. Warm climate animals such as hippos, water buffaloes and elephants got as far north as Germany in the last warm era.

Then the ice returned, covering the northern hemisphere as far south as Chicago and London, destroying the forests, lowering the seas, stranding the relocated coral reefs and eliminating unprepared species. (Some dopey grizzly bears got stranded in the growing Arctic Ice and the most enterprising of them survived to evolve into white grizzlies now called polar bears.) 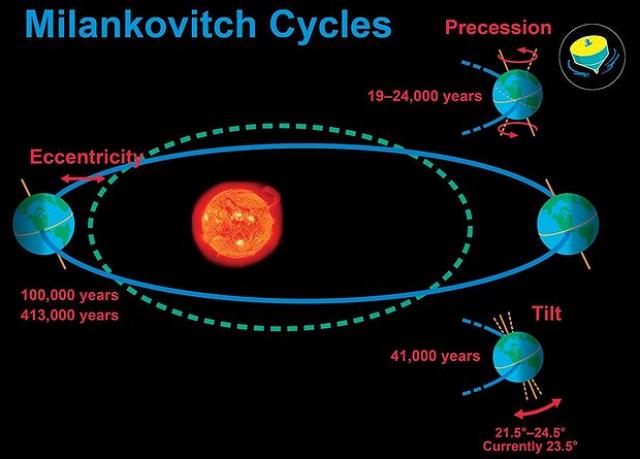 This regular repetition of natural climate change is best explained by the Milankovitch cycles relating to changes in Earth’s orbit and tilt. These drive variations in solar energy received by Earth and have the greatest temperature effect on the large land masses of the Northern Hemisphere.

On a longer time scale, passage of the solar system through the plane of the Galaxy seems to trigger magnetic reversals and violent spasms of volcanism, glaciation and species extinction.

What is the role of carbon dioxide in climate? Al Gore did a great job to dramatise the recurring cycles of glaciation and carbon dioxide in his widely acclaimed work of science fiction. But he missed two “inconvenient truths”.

First, the ice cores show that in the glacial spring-time the temperature rose BEFORE the CO2 levels rose. Therefore the rising CO2 cannot be a CAUSE of the warming – it is a RESULT of CO2 being expelled from the warming oceans.

Second, at the top of every summer-time in the glacial cycle, the high levels of CO2 in the atmosphere were totally unable to prevent the cooling into the next cycle of ice. CO2 levels fell later as the cooling oceans absorbed more CO2.

We are already in the autumn of the current glacial cycle and nothing man can do will change that. Global temperatures today are lower than they were in Roman and Medieval times. They will still fluctuate with the effects of daily, lunar, seasonal, yearly and sun-spot cycles, but the long-term trend of maximum and minimum temperatures will continue drifting downwards. As soon as summer temperatures in Siberia and northern Canada are unable to melt last winter’s snow, the growing glaciers will join to form ice sheets which reflect more solar radiation, and Earth will once again slip into another long hungry Glacial Winter.

The warm days, seasons, years and epochs have never been a deadly threat to life on Earth. Frost, snow, hail and ice are the killers. If our descendants do not have the energy, resources and wisdom to keep their people warm and fed through the coming glacial epoch, humans may follow our Neanderthal cousins who perished in the last glacial winter, just 20,000 years ago.

There is ZERO evidence in the climate record that carbon dioxide has a detectable effect on global temperatures. However if it does indeed slightly delay the onset of the next glacial winter, we and all life on Earth should count ourselves extremely lucky.

By far the best simple reference book I have read on the above subjects is:
“The Inconvenient Skeptic” by John Kehr. This book is written in plain language, but full of sound science, well researched and referenced. I highly recommend it for those wishing to understand what drives our climate. (Hint: It is NOT carbon Dioxide.)

Another well-researched and easy-reading book on the long term cycles of ice ages and volcanism is:

“Not by Fire, but by Ice” by Robert Felix:

Original Research on Sunspots and Rainfall Cycles – Prof Will Alexander:

The Holocene Warmth as revealed by the Greenland Ice Cores:
http://carbon-sense.com/2009/10/03/climate-always-changing/

The Eemian Warm Period was warmer than today:
http://www.nbi.ku.dk/english/news/news13/greenland-ice-cores-reveal-warm-climate-of-the-past/

Viv Forbes is a geologist/pastoralist who has studied weather, geological history and natural cycles for decades.

Limits to existing quantitative understanding of past, present and future changes to atmospheric carbon dioxide concentration 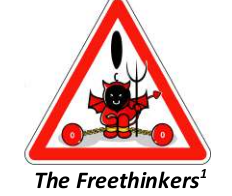