First, recall that hydrogen is NOT a source of energy such as uranium, coal, gas, oil, wind, solar, etc., but rather it is an energy carrier that needs to be produced by applying energy.

Bossel 2009 said: “Hydrogen is a synthetic energy carrier: High-grade energy is required to produce, compress, liquefy, transport, transfer or store H2 (in most cases this energy could be distributed directly to the end user from wind or solar).”

Hydrogen energy and what is the world’s best energy carrier

Green hydrogen (everyone is talking about it) can be produced via electrolysis from excess wind and solar electricity generation or in theory from any “green” source of power. Other than in desert states, such excess only exists in summers if at all.

European governments suggest that “green hydrogen“ will solve the intermittency problem of wind and solar via synthetic production of H2 as an energy carrier, so it’s important to analyze its production.

Today’s technology hydrogen’s low volumetric energy density and high cost to transport is a obstacle to the wide use of hydrogen. Compressed hydrogen storage requires heavy duty storage tanks made of substances that do not become brittle as hydrogen permeates the material.

More energy by multi-stage piston compressors is required to compress or liquefy and transport H2 – energy which must also be derived from the excess energy, e.g. from PV-Spain available during summer months.

On the subject of transport, Bossel et al. concluded:

At 200 bars, a 40-ton truck delivers about 3.2 tons of methane, but only 320 kg of hydrogen, because of low density of hydrogen and because of weight of pressure vessels and safety armatures. About 4.6 times more energy is required to move hydrogen through a pipeline than is needed for the same natural gas energy transport.”

It should be noted that significant research and progress has been made in recent years in relation to so-called “hydrogen sponges” (see Morris et al. 2019, and Northwestern University). Some candidates appear to reach 8% by weight of hydrogen. The materials used are relatively inexpensive and abundant, such as transition metals and carbon lattices as a scaffold for the metals.

In the not-too-distant future, this work promises to lead to an “H2-Revolution” allowing for an appropriate medium for storing hydrogen in a dense manner, thus presenting a potentially viable alternative to lithium-ion battery storage. A 500 kg Tesla battery, for example, contains less than 100 kWh of energy. The metal-organic Hydrogen “tank” with 8% hydrogen by weight contains about 1300 kWh of energy, or over 13 times the energy density of the Tesla Li-ion battery.

That would translate to a range of over 4000 km. Refueling, therefore, would not be a daily task.

In the case of Germany, the total “unused” “green” excess electricity from wind and solar reached about 6500 GWh in 2019 (link). Divided by 365 days and then by 24hrs, this yields about 740 MW on average excess green power that could be used to produce hydrogen. That would be a little less than 1% of Germany’s full load of 80 GW (see also Prof Holger Watter here).

Assuming we utilized all this available excess “green” power to produce “green” hydrogen, then we could create about 120,000 tonnes of green hydrogen in Germany today.

Note that it takes about 55.5 MWh of power and 9 tonnes of water to produce each tonne of hydrogen. Assuming we don’t account for the transportation, storage or any other losses (of course not a realistic assumption) then we could run 120,000 cars in Germany on hydrogen. 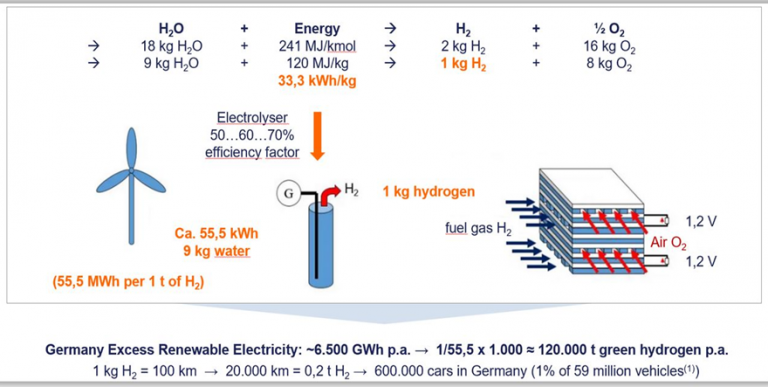 If we use the hydrogen and make ammonia or ethanol or any other alcohol or even hydrocarbon such as methane, then again we have energy losses. Below is the calculation if were to make methane out of hydrogen. 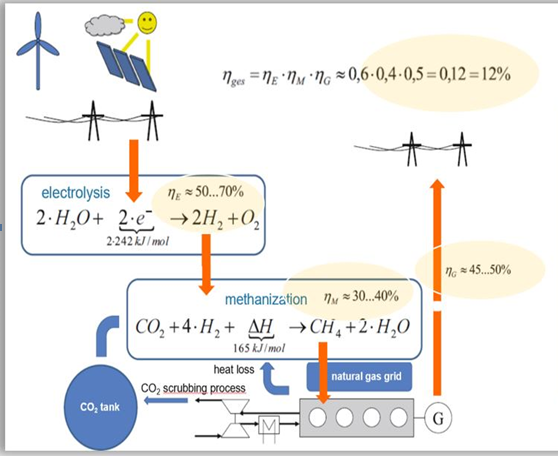 Energy losses to make ethanol, alcohol or hydrocarbon fuel such as methane are enormous. Chart: Dr. Lars Schernikau based on Prof. Watter.

You would be left with net 12% energy efficiency, which of course is not workable and therefore not really considered by governments.

Also see Seeking Alpha online here, for more on the subject (meant for investors in the hydrogen economy).

So what is the world’s best energy CARRIER

When asking Capt. Todd (Ike) Kiefer USN (ret.), Director of government relations and economic development for East Mississippi Electric Power Association and president of North Lauderdale Water Association, about what would be the best energy carrier if we had completely free and unlimited electricity available from wind, solar or fusion/fission he answered:

If we had unlimited electricity from nuclear (fission/fusion), our best option for transportation fuel would be to synthesize hydrocarbons from seawater and air.”

Considering the 100-year investment civilization has already made in liquid hydrocarbon infrastructure,
‘fission/fusion plus hydrocarbons’ is the only realistic energy transition over the next 50 years.” 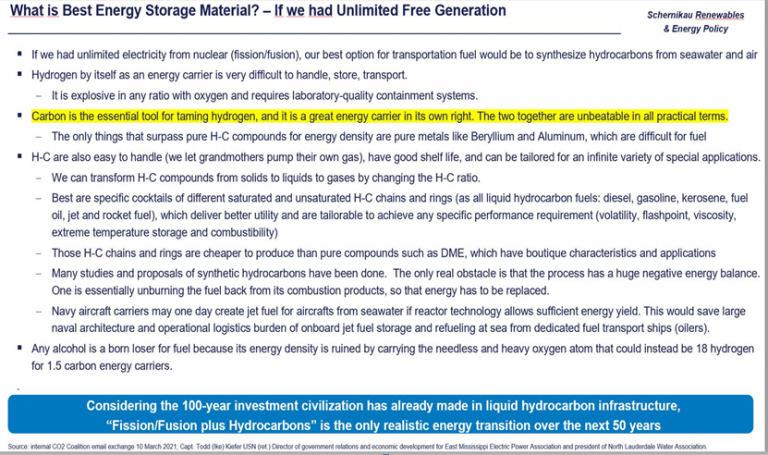 Dr. Lars Schernikau is an energy economist and entrepreneur born and raised in Berlin, Germany.