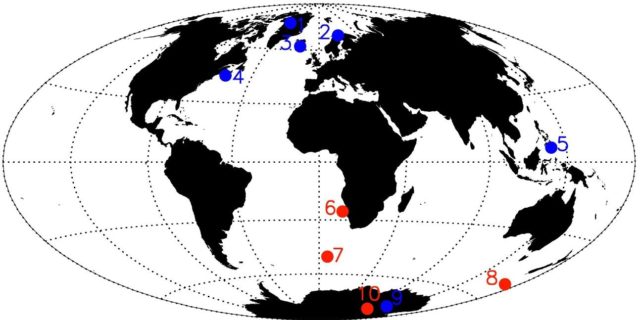 The solar impact on Earth’s climate is both a rich and open-ended topic with intense debates. In this study, we use the reconstructed data available to investigate periodicities of solar variability (i.e., variations of sunspot numbers) and temperature changes (10 sites spread all over the Earth) as well as the statistical inter-relations between them on the millennial scale during the past 8640 years (BC 6755–AD 1885) before the modern industrial era.. We find that the variations of the Earth’s temperatures show evidence for the Eddy cycle component, i.e., the 1000-year cyclicity, which was discovered in variations of sunspot numbers and believed to be an intrinsic periodicity of solar variability. Further wavelet time-frequency analysis demonstrates that the co-variation between the millennium cycle components of solar variability and the temperature change held stable and statistically strong for five out of these 10 sites during our study interval. In addition, the Earth’s climatic response to solar forcing could be different region-by-region, and the temperatures in the southern hemisphere seemed to have an opposite changing trend compared to those in the northern hemisphere on this millennial scale. These findings reveal not only a pronounced but also a complex relationship between solar variability and climatic change on Earth on the millennial timescale. More data are needed to further verify these preliminary results in the future.