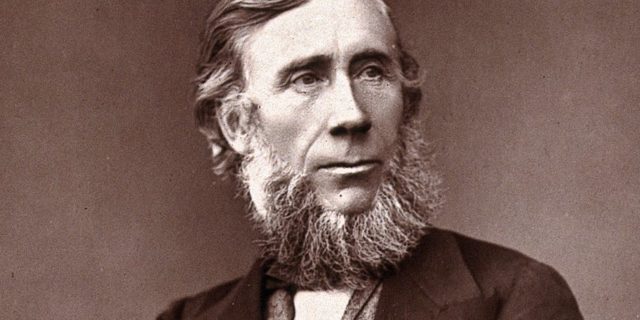 When you say “Tyndall” to an atmospheric scientist today, they are likely to think of the Tyndall Centre, Great Britain’s premier unit for climate change research. But the Centre is named for a man, whose adventurous career in 19th century science deserves an extensive biography.

Roland Jackson has written that book, The Ascent of John Tyndall, which will be published by Oxford University Press March 22, 2018. The former Head of the Science Museum in London and then Chief Executive of the British Science Association has contributed two guest posts exploring Tyndall’s impact on meteorology. You can follow him @Roland_Jackson or @ProfTyndall.

John Tyndall (c.1822–1893), Irish physicist, mountaineer, and public intellectual, is best known in scientific circles for his work on the absorption of heat by gases in the atmosphere (and for explaining why the sky is blue). He made his initial discovery of the absorption of heat by carbon dioxide and water vapour in 1859. That was three years after a similar discovery by the American Eunice Foote, though there is no evidence he knew of this. He soon imagined that the variability of gases in the atmosphere might help explain climate change on geological timescales.

But Tyndall never wrote about the impact of human activity on the climate. Not until 1896 was the actual warming effect of carbon dioxide estimated, by the Swedish chemist Svante Arrhenius. Though Arrhenius was aware of the potential of anthropogenic emissions, he also saw them as a potential benefit in delaying a possible ice age. It was Guy Callendar, in 1938, who made the quantitative connection between global warming and emission of the gas through human activity.

Instead, water vapour most interested Tyndall, because of its evident linkage to weather and local conditions.

Alongside his scientific research, Tyndall was a long-time scientific adviser to the Board of Trade and Trinity House on lighthouses. One issue that exercised him over many years was the provision of effective warning signals to ships in fog. It led him to an extensive study of the acoustics of the atmosphere.

Tyndall was struck by the observation that sounds heard clearly in one place could suddenly become inaudible, even though visibility or wind seemed not to have changed. This led him to a powerful insight. He imagined that water vapour could form invisible in-homogeneous “acoustic clouds” that scattered sound internally, preventing it from penetrating through (like a powdered crystal stops the transmission of light through it). Sounds of high pitch were scattered more than those of low pitch.

So the solution was simply to use a sound of low pitch, but as loud as possible. Hence the dull foghorn sound we hear so commonly. One newspaper referred to them as Tyndall’s “demoralised and brutalised sirens, those pretty foghorns that make one on land doubt whether hearing is a blessing, but at sea doubt whether there is a more useful faculty.”