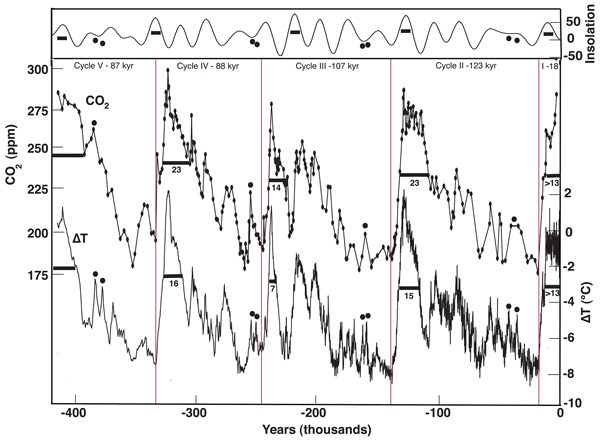 As simply based on fundamental logic and on the concepts of cause and effect, an epistemological examination of the geochemical analyses performed on the Vostok ice cores invalidates the marked greenhouse effect on past climate usually assigned to CO2 and CH4. In agreement with the determining role assigned to Milankovitch cycles, temperature has, instead, constantly remained the long-term controlling parameter during the past 423 kyr, which, in turn, determined both CO2 and CH4 concentrations, whose variations exerted, at most, a minor feedback on temperature itself. If not refuted, the demonstration indicates that the greenhouse effect of CO2 on 20th century and today’s climate remains to be documented, as already concluded from other evidence. The epistemological weakness of current simulations originates from the fact that they do not rely on any independent evidence for the influence of greenhouse gases on climate over long enough periods of time. The validity of models will, in particular, not be demonstrated as long as at least the most important features of climate changes, namely the glacial–interglacial transitions and the differing durations of interglacial periods, remain unaccounted for. Similarly, the constant 7 kyr time lag between temperature and CO2 decreases following deglaciation is another important feature that needs to be understood. Considered in this light, the current climate debate should be considered as being the latest of the great controversies that have punctuated the march of the Earth sciences, although its markedly differs from the preceding ones by its most varied social, environmental, economical and political ramifications.