The false notion of Anthropogenic Global Warming (manmade climate change) was first conceived of by the “Club of Rome.” The climate alarmist’s movement took root in 1975 when Margret Mead and Paul Ehrilch championed it in attempts to force population reduction. Over the last 40 years this has morphed into a $2 trillion per year enterprise enabled by the UN’s IPCC. The goal is to force massive reductions in worldwide population to be governed by a united one world government. The primary agenda driver is fearmongering and media propaganda designed to create conditions that compel elected leaders to advocate the abandonment of fossil fuels and to promote green-renewable energy pipedreams. These leaders are expected to do this without understanding the scientific, economic and geopolitical facts and consequences. The introduction of carbon taxes as supported by the U.S. EPA’s CO2 endangerment ruling has had enormous negative impact on the wellbeing and prosperity of people worldwide. Billions of people have been indoctrinated in the false belief that trace quantities of CO2 in our atmosphere is harmful and creates an existential threat to humanity. Our efforts will expose the falsehood of the AGW/climate change supposition to all elected leaders, the media, and the American people. Our mission is the reversal of the EPA’s CO2 endangerment ruling, the elimination of state and federal subsidies, tax credits and investments in green-renewable energy projects and the education of the public on the largest deception and fraud ever created by mankind and supported by the majority of the political body. This includes years’ worth of public reeducation and the revamping of public school and college teachings. It is of paramount importance that this scandal be prominently exposed weeks prior to the American November election.

The Project Mango Plan is divided into 3 phases.

EnergyCite is facilitating the development, publication, and distribution of three printed children’s books and one on-line “encyclopedia” covering the following:

b. A children’s book disputing all the claims of the climate change alarmists based on science and empirical evidence and providing factual rebuttal with verifiable sources. This book is complete and has been offered for sale on Amazon dot com as “Don’t Be Afraid of Climate Change.”

c. A children’s book explaining the basic concepts and science of energy supporting the fact that only fossil fuels and nuclear energy can provide the enormous amounts of energy for a world of 7 billion human inhabitants and exposing the hypocrisy and fraud of the “renewable pipe dreams.”

The three book set will be sent along with a simplified version of our Chief Scientist, Dr. George Chilingar’s article, “Cooling of Atmosphere Due to CO2 Emission” . This book was dedicated to President Donald Trump and presented to Donald Trump Jr. by Pat Boone for delivery to the President in 2019. This set will be delivered via Fed Ex, UPS, or the like with delivery verification signature to:

Books a, b, and c, will be written in the style of a children’s books. However their initial principal audience will be adults. They are written to be very quick reads using simple language and a minimum amount of scientific terms and phrases.

The fourth “encyclopedia” book will be an extremely authoritative text, documenting the origins of the global warming deception, the deceptive formation of carbon cap and trade, the use of the climate change deception in pursuit of a socialistic one world government, and the complete trail of the fraudulent science used to support it. Moreover it will provide the most comprehensive discussion of the science which invalidates the atmospheric greenhouse effect. This will be the most authoritative “climate change” book yet written and will be used as the basis of fact for the Mango movie which will be subjected to major ad hominem attacks by the climate change alarmists community, green industries, the media, and the democrat political party. Additionally this book aims to become the handbook for much future legal litigation and discovery investigations surrounding the enormous deceit and fraud within the EPA and other government entities under the previous administration.

The children’s book will present concepts in language an eighth grader can understand but will have annotated references of each point and concept to a second far more comprehensive book which provides voluminous proofs and details. The fourth book will be available online for quick reference.

Wide scale deployment of the EnergyCite residential energy management system. This will be will be used to “broadcast” short topical videos on energy basics and climate related issues. The focus is to educate the public on the absolute unavoidable need for fossil fuel and nuclear generation and the indisputable lack of viability of green-renewable energy for baseload power generation. Production funding will be obtained from energy resource and generation equipment and other related companies based on the ClimateCite Corp 501 (c)(3) non profit foundation.

The abstract describing the issues and events Mango will teach is presented on ClimateCite’s website.

Penelope was a very high IQ gifted child and is now a licensed massage therapist and she has numerous other vocational certifications including private investigators certification, tax preparer licenses and a private pilot’s license. Her passion is to acquire a mango farm. However, she lives in an area in central Florida that is slightly too cold to grow mangos. Thinking that global warming may fix her inability to grow mangos, she researches 20 years of U.S. Federal FDA “plant hardiness guides” and sees there has been no changes in localized temperatures. Being conditioned to all the media rhetoric about global warming she begins to study and question the science as well as the history of the “global warming movement.” She meets and falls in love with the black sheep of the famous “Rothschild” family, Daniel, who explains to her the nefarious interworkings of “The Club of Rome,” the CFR, the Trilateral Commission, Davos World Economic Forum and the World Bank. And connections are made with the carbon cap trading mafia and the entire skullduggery within the U.S. federal government leading to the EPA’s classification of carbon dioxide as a pollutant. In her search for the truth, Penelope and Daniel met and interview all the leading climate skeptical scientists throughout the world and they attend various “The Club of Rome,” CFR, Trilateral Commission, Davos World Economic Forum and the World Bank meetings. Penelope and Daniel hatch a plan to expose the fraud and deceit known as the climate change hoax. However, a leak occurs and the carbon cap trade mafia finds out and orders a “takeout” of Penelope and Daniel. Major high tension actions scenes take place ending with Penelope and Daniel in the middle of a small commercial aviation field. Penelope is able to hotwire an unlocked airplane and she and Daniel take off for his primary home in Israel. There they manage their secret plan to expose the hoax to the American people and their elected leaders. They bring down the climate change hoax with what becomes a widely famous and sought after children’s book that was delivered by various ingenious and comical means to all elected leaders in America as well as all TV stations, magazines and newspapers.

In today’s current liberal and business climate it is doubtful that a movie such as Mango could be distributed by the traditional movie distribution network. However once the children’s book is released and the political climate in Washington DC is in total disarray over the climate change issue, the Mango movie becomes topical and no longer “politically incorrect.”

First round funding completes phase I and leads to positive cash flow, initiates phase II, and allows for the correct “political correctness” conditions to obtain phase III funds through traditional Hollywood syndication. The EnergyCite, Inc. Private Placement Offering Memorandum (prospectus) (page 19 under General) allows immediate funding as time is of the essence in view of the American elections in November. Part or all of an investment in the PPO may be converted, dollar for dollar as a contribution to ClimateCite Corp, a nonprofit organized exclusively for the scientific based and educational purpose of developing, preparing, promoting, and providing materials and related ancillary applications with an emphasis on climate matters, energy resources, and conservation of energy thus qualifying as an organization exempt from federal income taxation under Section 501 (c) (3) of the Internal Revenue Code pursuant to the ClimateCite Corp formation and Articles of Incorporation documentation. 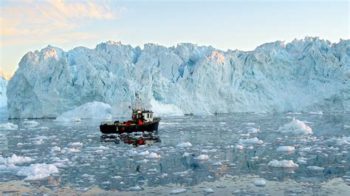